I once dashed an email off to a colleague in a hurry. The email concerned, in some way, the Judeo-Christian deity, known in the Hebrew Bible by the tetragrammaton YHWH. Quite unintentionally, my harried fingers tapped out YWHW—an honest, if impious, mistake. My colleague, who happens to be Jewish, immediately pointed out my unintentional blasphemy—one more casualty of the computer age. Naturally, I apologized and life went on. (I try not to spin out the larger implications.) The point is, based on the third (some would say “second”) commandment, Judaism has strongly preserved the taboo on using the divine name at all. God’s name is spelled without vowels to prevent anyone from trying to say it, and when written with the vowels of the word “lord” (adonai) gives us the false form Jehovah. Casual use of the divine name is considered offensive, and some would say it’s swearing. 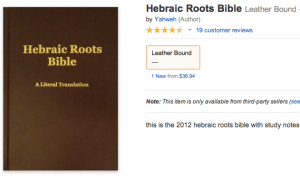 While on Amazon.com the other day—it is the site to which I go for solace; so many books! So many books!—I came across the Hebraic Roots Bible. Subtitled “A Literal Translation,” it was clear that this was yet another well-intentioned, but ill-fated attempt to make the definitive English translation of the Hebrew Bible. True, literal translation is a chimera. Languages are thought-systems and can only be approximated in other languages. Those who wish to read the Bible literally must become proficient in Hebrew and Greek, with a smattering of Aramaic. In any case, none of that caught my attention. Without a hint of irony, the author of this book was listed as Yahweh. In case you’ve been wondering why some prayers are going unanswered, you may have your answer here—the Almighty has been busy writing a book!

My first reaction was a coy smile. That is kind of a cute selling point. But then I realized there was likely no humor to it. This was probably understood to be read literally: Yahweh wrote this book. I wonder who he got to write the Foreword. My error to my Jewish colleague was, literally, unintentional. This was literally scary. Who would be bold enough to claim that their own interpretation was the word of I Am himself? Why did he wait until 2012 to publish it? Blasphemy comes in a variety of forms. While still at Routledge, one of my Jewish authors insisted that I strike the blasphemy clause (standard for many publishing contracts) from his agreement. “Who can write anything that isn’t considered blasphemy by somebody?” he reasonably asked. The thought comes back to me, looking at the Hebraic Roots Bible. The author’s name, after all, didn’t even make it onto the cover of the book.