For never having been a Catholic, my life has been strangely tied to the Roman Catholic Church. Like many in my diminishing profession, I was raised in a religious household—in my case non-denominational Protestantism with a strong Fundamentalist streak—and have wandered a bit from my starting point. When my family moved to a small town with just two churches—United Methodist and Roman Catholic—we had no choice which to join. I learned the Methodists were just disgruntled Anglicans, and logic dictated that I would eventually join the Episcopal Church and gain a deep appreciation of Catholicism. My first professional job was teaching at an “Anglo-Catholic” Episcopal Seminary. While there I was interviewed for positions at Roman Catholic schools, and not infrequently brought to campus: the University of St. Thomas in the Twin Cities, Assumption College in Worcester, Massachusetts, Sacred Heart School of Theology just down the road in Hales Corners, Wisconsin. Most of the time I was in the list of finalists when the position would go to a Roman Catholic, “no hard feelings, right?” Long ago the Episcopal Church, ironically, got out of the higher education market.

It is with this background that I keep an eye on the Roman Catholic Church. Many friends and colleagues are Catholic and we have far more in common than I have with my Fundamentalist forebears. I frequently find myself in wonder at Pope Francis. Many church leaders have made the news over the past several decades, but few of them for such good. In an article on NBC over the weekend, the Pope called for seminary reform, noting that always toeing the line will turn priests into “little monsters.” I taught at Nashotah House for fourteen years, and I know exactly what he means. I encountered students who could quote Paul about being freed from the law and in the next breath lay down ecclesiastical law with enough force to behead a heathen. The Episcopal Church, which is small but disproportionately powerful, should take the words of the pontiff to heart. 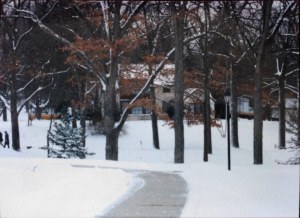 A cold day in…

Pope Francis noted that seminaries need to keep up with the times. Indeed, the laity of most religious traditions have little trouble accommodating to culture while their faith remains mired in the Middle Ages. In a world robbed of essences and meanings, it is difficult to teach future clergy that the spirit of a faith can be honored in outwardly different ways. The idea that we can just hold on ’til Jesus gets back should’ve been questioned once Islam came to be a major force a few centuries after Christianity settled in. Since that time Christianity has fractured into thousands of sects united by little more than essences. Instead of settling in for the long haul as an empire, the Pope is suggesting that the church settle in as servants. That’s a radical idea. And it is one, if I read my Bible aright, that its founder would be pleased to find in force should he ever decide to return.