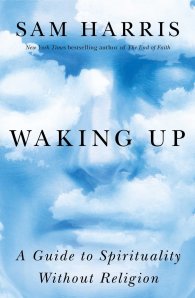 I am in two minds about Sam Harris’s Waking Up. Literally. I haven’t read Harris since The End of Faith, and I have to admit that I found Waking Up to be a very engaging book. I can’t agree with everything Harris writes—that’s an occupational hazard of acquiring advanced degrees—but to have a scientist, an atheist no less, praise spirituality felt incredibly genuine. Spiritual experiences happen. I’ve had a few doozies over the years. I’ve also read a number of scientists who tell me they’re all an illusion. Harris admits that consciousness is a mystery. His use of “mind” instead of “brain” won me over from the beginning. I discovered that the atheist can also be a seeker. Dogmatism, of whatever stripe, is the enemy.

Harris has considerable experience meditating. This is no activity for posers or wimps. It is, despite minimal physical demands, hard work. Throughout the book we get the sense that Buddhism is among the least objectionable religions, when divested of its myths. I do wonder, however, if demythologized Christianity was ever given a fair chance. From my own experience, some of the selflessness advocated by Harris can be found in taking aspects of Christianity seriously. I understand, I think, Harris’s objections to religion. It can, and does, lead to horrors both obvious and subtle. Yet, every once in a perhaps great while, it does offer redemption. Meditation, for example, has its roots in religious practice. It is this that Harris calls spirituality. And it is good.

A Guide to Spirituality without Religion is an apt subtitle for this brutally honest and open book. Harris’s knowledge as a neuroscientist endows his ideas with great authority. He opines, and he is not alone, that meditation demonstrates that “I” is only an illusion. This loss of self will haunt me for some time. For decades I is all I seem to have. Still, I am pleased to find an open-minded scientist on this same path I tread. Raised to be both spiritual and religious set the trajectory of my otherwise logic-driven life. You can’t go back and change all that, but you can grow up. To read of Harris’s spiritual experiences in the geography of great spiritual masters as well as in the laboratory instill in this reader a profound hope. Whether or not this reader is merely an illusion. There may be morning after this long night, after all.

3 thoughts on “Growing Up”