Did you remember to set your clock back? Depending on where you are (and this presumes there are any people reading this at all) it might have been a mistake. When I worked with Routledge, we had weekly trans-Atlantic meetings via conference calls. I remember the general confusion of what time it was where, and how that effected meeting times. The UK sets its clocks back at a different time then many states do this side of the ocean. As much as it is nice to have an extra hour of sleep (next weekend for most Americans, this morning for the British Isles) it really never seems worth the disruption on the other end of “standard time.” In the spring it will take several weeks to adjust to disrupted sleep patterns after long winter naps—for those who are able to sleep in, in any case. I’ve long thought it is time to do away with this practice: if daylight savings time is a good idea, why don’t we just keep it that way all year around? Greenwich Mean Time, however, could never admit to being wrong. 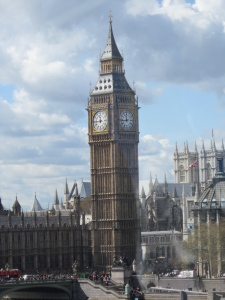 I was always told daylight savings time was because of concerns for children walking to school in the dark. An article in The Guardian, however, gives the real reason. It was war. During the First World War (which impacted so many aspects of life that we’re still sorting them all out), Germany implemented daylight savings time to conserve fuel to support the war effort. Squeezing a few more minutes of daylight from a slumbering public meant more resources for the engines of destruction. Other nations soon followed and when we turn our clocks ahead in the spring and yawn wicked yawns all day at work and stumble about for lack of sleep, we wonder if that extra hour’s snooze in the fall was really worth it. Because of my commute, I rise early. If everyone awoke around 4 a.m., daylight savings time would quickly become moot. It does nothing to help. I already catch the bus in the dark and arrive home after dark, as I will until well into spring. It is a holiday with no meaning.

Religions have been, historically, the clock keepers of humanity. Our hours were regulated for prayer, our weeks divided up for a day of worship or rest, our years punctured by holy days. All of this was done for the sake of religion. In our secular world, there would be no reason beyond the recognition that people are more productive when they can rest to give them one day off in a week. Seven days corresponds to no natural division of time, unless you consider a quarter of the moon’s phases for 28-day months to be significant. Religions have been our time-keepers. Daylight savings time, however, was the child of war. This week our UK colleagues will be well rested and content. Next weekend the US will join them. But the second horseman of the apocalypse has sanctioned this unholy day, and when the spring rolls around, he will exact his toll. We’d better rest up in the meanwhile, and I, for one, say let’s banish the horseman all together.