My brother, who art near Philadelphia, recently told me that the City of Brotherly Love began towing cars from the no park zone a week before the Pope’s anticipated arrival. There are those apocalyptic concerns for the commute into New York City this week as well. Papal visits are always big news, but Pope Francis has captured the hearts of many, Catholic, Protestant, and non-Christian alike, because of his obvious and sincere care for people. Mercy, kindness, sympathy, and empathy have long been overlooked in many organized religions, and to have the head of the largest Christian body in the world emphasizing just those things has been a breath of well, spirit. As our world has turned increasingly towards materialism fueled by a rationalism that says this physical world is all there is, a hunger has been growing. People need to be assured that there is some meaning in being people. 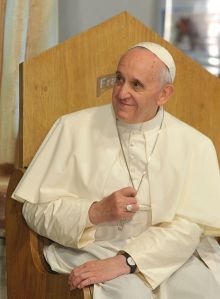 Theological purity is all fine and good, but it is only, literally academic. We send our clergy to seminaries to teach them to understand the rational part of faith. Many laity may not realize that a Master of Divinity is a three-year degree because it has to allow time for spiritual development. I was unlike most seminarians, having majored in religious studies. Coming into ministry from all areas of life—science, medicine, politics, business—many seminarians aren’t accustomed to taking school time to get in touch with their souls. It is a foreign concept in a world where we’re daily told we have no souls. Pope Francis is a pontiff with a soul. And the world has noticed.

We need those to whom we can look up. We need heroes not only of the action movie variety, but those of more human dimensions as well. Two of the most populous cities in the country are preparing for a kind of epiphany. America has long been a country of laissez faire ethics. Leave it alone and it will all take care of itself. We can all see through that. The northeast coast is bracing for a different kind of hurricane this season. It will mean traffic headaches, for sure, and no doubt many will be chagrined at all the fuss. Still, I have a difficult time seeing this as anything other than a hopeful sign. Perhaps we have a need for religious heroes still, after all.