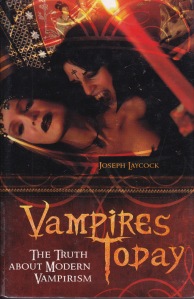 Sometimes I feel guilty. A grown man reading about vampires? Then I think of such puerile things as television and the stock market over which other adults waste their time and my pituitary gland releases endorphins and I carry on. I must say, however, after reading Joseph Laycock’s Vampires Today: The Truth about Modern Vampirism, that I’m not a vampire. Nor have I ever wanted to be. I am fascinated by the idea, however. The more I read—as is the case with most good academic books—the more I questioned definitions. Laycock does a good deal of that questioning himself in this book, and I came away wondering what indeed defines a vampire? As a child it seemed pretty clear. The vampire was a blood-sucker who came out at night. Fangs, a thirst for blood, and a faded aristocracy seemed to be the essential characteristics. But I was only a child.

Before you get the wrong idea about Laycock’s book, I need to say that his is a serious study of modern day vampires. Yes, they exist. No, they’re not easy to define. As an academically trained scholar of religion, Laycock is keenly aware that self-definition is crucial to categorization. Religious believers self-identify. We have no way of categorizing an adult (and some would say no way at all of children) without their own affirmation of what they believe. Vampires Today, however, raises the pointy question of whether those who self-identify as vampires constitute a religion. Or if vampire communities may be considered religious groups. In case you’re confused: many people identify themselves as vampires—sanguinarian and/or psychic. They believe they require the life energy of others to live and prevent illness. They sometimes drink blood—with permission—or siphon the life force of other people. Like all adults, they should be treated as self-identified. Probably not, as Laycock carefully spells out, a religion.

As in his other books, Laycock takes seriously groups that would, based on numbers alone, be considered fringe. Nevertheless, these groups are a part—sometimes an influential part—of larger society. We live in a world where we’re authoritatively told there is nothing but matter and energy, and as biological beings our purpose is reproductive success and then death. Is it any wonder that vampires and others are seeking something more? I’m no vampire. I read the occasional, thoroughly pulp, Dark Shadows novel to recapture a little of that after-school wonder I felt watching the waves pounding on the Maine cliffs while Barnabas Collins lurked inside. And he bore a strange truth that was perhaps instilled in those young years. Age is only partially a biological matter. Defining it any other way is, I have to believe, immature. So I read about vampires and wonder.