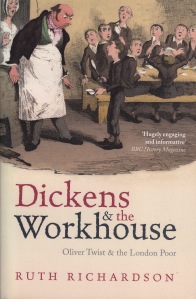 As colder days settle in I add layers and sit in our under-heated apartment and think about the lot of the poor. I don’t think billionaires really understand the plight of those who, no matter how hard they work, just can’t get ahead in a society that values class above individual welfare. I’ve noticed the increasing number of homeless on New York City streets. Many are clearly those who’ve lost jobs and can’t afford to pay the rent of even a modest apartment in the city, let alone Trump Towers. Having lost jobs myself after a lifetime of hard work, my sympathies are with the street dwellers. Ruth Richardson’s Dickens and the Workhouse: Oliver Twist and the London Poor reminded me that this is not just an American phenomenon. The book begins as kind of a detective story to locate the workhouse that Dickens features, if fictionalized, in Oliver Twist. Richardson makes a strong case that this workhouse has been found and that relics of Dickens’ under-acknowledged London residence just a few doors down from it influenced much of his first-hand knowledge of the life of the poor.

In the case of London, poor laws were put in effect to punish those who couldn’t fend for themselves. Inmates at poor houses were kept on a legally mandated starvation diet (literally) with inadequate medical care. Instead of censuring this injustice, the Church of England stood behind it. The perverted thinking was that if anyone knew how bad it was in such places they would try doubly hard not to be poor. The funny thing about living in poverty (I have some experience of this) is that it isn’t a choice. I didn’t particularly get along with my step-father. I can say, however, that he was one of the hardest working men I ever knew. Long hours spent at work, sometimes the whole night through, to support a family of six on just above minimum wage. This was his daily existence. I must’ve looked soft in his eyes.

Richardson’s book, although fascinating, is also distressing. The idea that a society thinks the most humane way to deal with those who are struggling is to punish them further, for me, defines evil. One of the characteristics of our species, according to biologists, is that humans often show extraordinary care for other creatures, often of other species. For our own, however, we feel that if you’ve “earned” something by exploiting others it is your “right” to keep it and let them suffer. This economic system is rotten to the core. We may have come a long way since Dickens’ time. We don’t have such exploitative workhouses in Manhattan. Instead, we have so many people sleeping in the streets that a walk to work has become very Dickensian indeed. Somehow I don’t see the situation improving in the next four years.