Don’t believe the lies. Your government is lying to you already on day 1. I watched in disbelief as Trump’s press secretary for the White House, Sean Spicer, told bald-face lies the very first day of Trump’s reign of terror. I was in Washington, DC. My niece attended the inauguration. My extended family attended the Women’s March on Washington the next day. Spicer, clearly comfortable with untruth, lied through his teeth mere minutes after I myself stood outside the White House, saying that Trump’s inauguration was the best attended in history, far outstripping the paltry women’s march. Pure, unadulterated lies from the White House. My niece, and many others, noted how poorly attended the inauguration was. The evidence was in the white plastic matting, unbesmirched by mud on Saturday morning. The federal government disallowed the use of the Mall for the Women’s March. The unused matting was very clearly white the next morning. Around 8:30 on Saturday morning I saw for myself.

The Women’s March may have been the most significant event of my life. I was part of something much bigger than myself. Along with thousands of others, I stood for three hours while celebrities including Scarlett Johansson, Michael Moore, and Madonna, appeared on stage to cheering crowds. There was barely room to stand. We marched past the Washington Monument to the White House. A US Security guard told us there were an estimated 1.2 million people there, making this one of the largest marches on Washington in history. Just inside that white-washed tomb Spicer was lying his face off. He castigated the press for telling lies. Wake up, my fellow Americans. On day one our new government has shown that it intends to lie and smirk its way through every attempt at honesty. My eyes did not deceive me. I was there, on the ground. 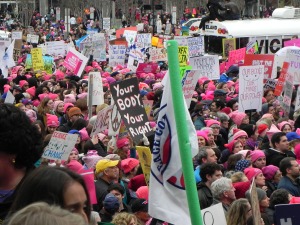 I work in Manhattan. New York City is a community of some 8 million people. I’ve never in my life been in a crowd as large as yesterday’s in Washington. The Women’s March was peaceful and perhaps the largest protest in our nation’s history. Protests in over 600 cities around the world joined it. An administration of the people, by the people, and for the people would acknowledge that. The smug, implacable—and I use this word sparingly—evil administration that insists on lying to its citizens is already spinning a false narrative. I was there, on the ground. This March may have been the best use of time in my life. Beware, Americans, your government will regularly be lying to you until future notice.