“The President” responded to the Women’s March on Washington by tweeting that he was “under the impression that we just had an election!” Perhaps if “the president” read more he would understand that instead of looking in a mirror you need to look out the window once in a while. The Electoral College is even more outdated than the Republican Party and has only stood in place so long because our elected officials lack the energy to dismantle it. Like Daylight Saving Time. A loss by nearly 3 million votes is not a win in anybody’s book. I would suggest that Mr. Trump and his party learn to read. In strings of more than just 140 characters. Those who read know that Russia hacked our election. Voters can speak with their feet as well as with their fingers. We can see the Republican Party for what it’s truly become. Those accustomed to a lifestyle of theft sometimes don’t realize that others have seen their fingers in the cookie jar. 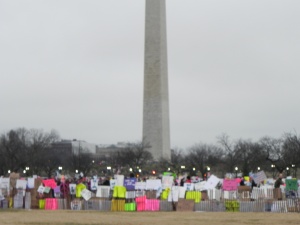 As one of the many marchers I would say if you want a mandate, look out your window. George Washington, if I recall my history correctly, did not try to put his will over on an unwilling country. Indeed, most of us believe he had too much integrity than to try to hide behind something like an Electoral College to reinforce his tenuous grasp on the reins of power. It’s our constitutional right, Grand Old Party. We can protest. Legally. We will protest. Continually. We will not let you suffer under the delusion that you won anything. Your party gamed the system and any “president” who reads would say “I can see now that I misunderstood.” Backing down is not cowardice. Listening to others is not weakness. Being “president” means having to ignore your cronies once in a while. Vox populi, for those who know how to read, means “the voice of the people.” Democracy is upheld by the consent of the governed, not electoral casuistry.

Those who rely on crooked systems to claim a mandate need to learn to read. Reading requires thought. Concentration. And the will to repair rather than to dismantle. Try ignoring the handlers once in a while. Was the “president” not at the inauguration? Did post-truth press secretaries hide the photos? Please look away from the mirror. Governing with the consent of the governed is hard work. It’s not about brokering deals and looking for one’s own best angle. It’s not about “me first.” As long as any disabled child, any woman who’s been sexually assaulted or discriminated against, and any African American can be told that his or her life doesn’t matter the job will be never ending. The accountability just started this weekend. Read and learn. We are the people.