Religion and folklore encapsulate what folk believe. Human beings, despite rationality, are ritualistic creatures. Psychologists have their work cut out trying to explain why we do this or that odd thing, and historians sometimes dig deep into the backstory to find some hint of a tradition’s origins. Although I lived in Edinburgh for over three years, and drove through South Queensferry in the shadow of the great Forth Bridge a number of times, I never heard of the Burryman. In case you haven’t either, here’s a link a friend sent to a brief video about him. In it Andrew Taylor explains the tradition. Each year, going back to South Queensferry’s pagan past, a citizen dresses in a suit of burrs to ensure a good harvest and bring good luck. What’s fascinating here is that burrs are something people generally avoid, although they are an ingenious method of seed dispersal. They stick to clothes, and even skin and can be annoying even singly. Why anyone would submit to an entire outfit of burrs is something only folklore can answer. 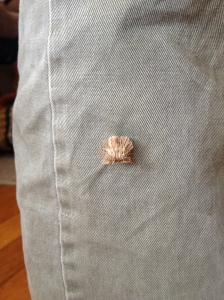 Anthropologists are in short supply. Universities don’t like to fund the study of folklore since it doesn’t lead to jobs. The end result is that what we know of many strange traditions is anecdotal. A few years back I got soundly dressed down in an academic setting for referring to a popular publication of Scottish ghost stories. You see, I was writing an article for publication in an academic journal. I wanted to document a story I’d memorized by dint of the fact that a ghost tour guide would stand beneath our window every night in Mylne’s Court and recite his tale. (I traced it back to a potential Ancient Near Eastern origin.) The problem was, no academic would deign to write about such decidedly low brow tripe. In order to find a written source, I had to cite a popular book. Academic reviewers responded with scorn that I would never pass on to an author, speaking as an editor. This was, however, in the old school days.

So, how would we find the backstory to the Burryman? Great Big Story went straight to the source. Andrew Taylor, the incumbent Burryman, tells what he knows of the tradition. You can’t even see the Burryman from high in your ivory tower where pure thought is your only companion. I’ve always been a street academic, though. Growing up blue collar, I find it much more interesting to see what people are doing out here where the professionals don’t tell them how to behave. The pagan past is still alive. We don’t need a wicker man to prove the point. All it takes is a bunch of dried burdock and some very thick skin.