Ecclesiastes, I used to tell my students, is one of the most unusual books of the Bible. And that’s saying something. When we think of the Good Book we think of pious thoughts and lofty feelings—you know, the white-shirt, evangelical sort. The Bible, however, isn’t what most people think it is. Ecclesiastes, nestled right there near the geographic center of the Protestant Bible (and there’s more to say about this) is a book unlike any other. It is philosophical, weighty, and somewhat gloomy. It is a book where God can’t be relied on to help you and the world may very well be against you. It honestly admits that things just aren’t as they should be. “The quiet words of the wise are more to be heeded than the shouting of a ruler among fools,” it says, “Wisdom is better than weapons of war, but one bungler destroys much good.” (That’s 9:17-18, in case you want to check me out.) 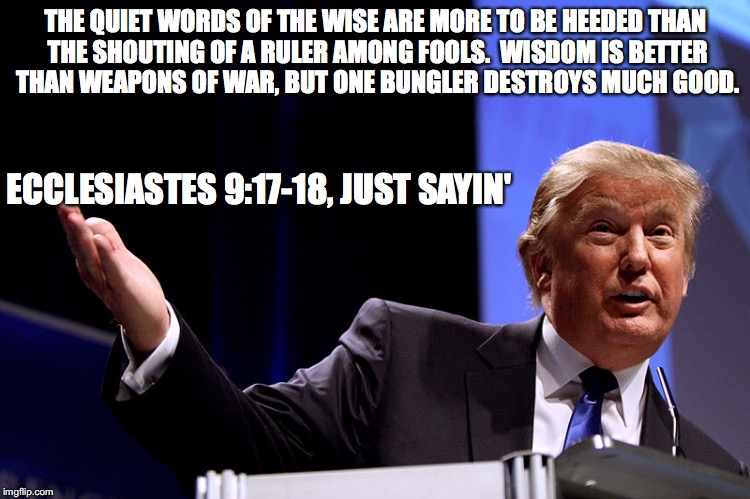 America used to be known around the world for its pragmatism. Now it’s being laughed at as the master of irrationality. I remember when elections were matters of gravitas and serious consideration of the issues. They’ve now become high school popularity contests, even including the locker-room talk. Trump insults his own party and they kiss up. We have a president more impressed by kid’s toys in Saudi Arabia than by the top-notch research universities in his own country. I turn to Ecclesiastes for consolation. It’s a good book to read when everything’s going wrong. “For there is no enduring remembrance of the wise or of fools, seeing that in the days to come all will have been long forgotten.”

My white-shirted friends will surely object. I’m taking verses out of context—prooftexting, it’s called. But, my evangelical friends, you say Scripture is the word of God. Fully inspired and inerrant, is it not? How can you dismiss the wise, wonderful, woeful book of Ecclesiastes? The world is a complex place. Those who seek office as public servants should at least be able to distinguish the servant from the master. They lay their hand upon the Bible to take a sacred oath of office. Beneath that withered hand lies the book of Ecclesiastes, forsaken among its more cheerful siblings. Do not forget Ecclesiastes. It is the book that best makes sense of our day. “Better is the end of a thing than its beginning; the patient in spirit are better than the proud in spirit.” Herein lieth the truth.

1 thought on “The Preacher”