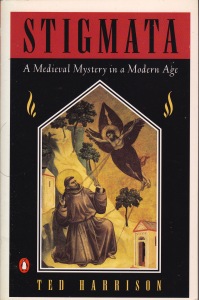 Liberation from the confines of academia allows for the occasional indulgence in taboo subjects. I can’t remember when I first heard of stigmata. I didn’t grow up Catholic, and, like many Protestants, distrusted much of what came from Rome. Still, I was interested in the supernatural. When I learned that people in this modern day and age sometimes developed unexplained wounds corresponding to crucifixion, I was intrigued. Ted Harrison’s book, Stigmata: A Medieval Mystery in a Modern Age, is the first I’ve actually read on the subject. It has some fascinating observations to share. It was some time after seminary that I learned that Francis of Assisi (aka St. Francis) was the first stigmatic. I had admired Francis for turning down wealth to assist the poor and commune with nature—what’s not to like?—but I didn’t realize that he had initiated this rare, but real phenomenon.

Harrison considers the question of why it was only in the 13th century that the stigmata began to occur. They have occurred ever since, in very small numbers, primarily in Italy and primarily among women. But why then? He points out that the church, shortly before this time, began to emphasize the physical suffering of Jesus on the cross. We’re probably all familiar with some of the gruesome images that emerged from the church and its artists at that time. As such images proliferated, people were given a visual focus that directed their devotions. Every great once in a while, this led to stigmata. Why women? As Harrison points out, men with intense spiritual needs could become priests. Women could not. The church would not forbid personal devotion, and if such devotion led to stigmata, well, a person arguably had a direct line to the divine. That was something normally preserved for priests through the Eucharist.

Stigmata have to be understood in the context of mysticism. The more recent cases studied by Harrison include some non-Catholics and some other unexpected candidates for what is, after all, a very intense spiritual experience. What emerges is a thoughtful, one might dare say contemplative, approach to the issue. Some stigmata have been self-inflicted. Some have not. Medical personnel have witnessed and examined these improbable wounds and have not explained them away. Once, during a faculty meeting at the New College of Edinburgh University (I was post-graduate student representative) one faculty member groused after one of my advisors had presented a challenging idea: “you’ve dropped us in a mythological world. I want to get us out.” There it is in a nutshell. Some people can live in a world where stigmata occur. Others have to explain it away. The difference is all in the matter of perspective.