Time has been at a premium lately, but when I have a few spare moments I like to read the Oxford Dictionaries blog. Those of us who make a living with words often find them utterly fascinating. Simon Thomas’ post, “Worth their salt: words and phrases with roots in ‘salt’” brings a number of interesting facts to light. Salt, now on the list of public enemies, is essential to our well-being in small doses. His clever post includes “salt of the earth,” a phrase biblical through-and-through. It reminded me of the fact that the Bible’s become so porous that few people can say what’s actually in it. It’s kind of a big book, and who has the kind of time needed to read it all, let alone remember what it did or didn’t say? Many phrases are attributed to Holy Writ that don’t appear within its covers, while others that do come thence are thought to originate elsewhere. Strange but true.

We may never come to an agreement on what Jesus actually said, but “salt of the earth” is a phrase attributed to him. Indeed, he may have coined the term “saltness,” but I haven’t researched that thoroughly. The idea of essences, I’m told, is outmoded. But the idea is fascinating—what is salt that has no taste? Would it work to clear our roadways in winter time? There’s a layer of salt on my car already, and it only just snowed for the first time this year. We all know what salt is, what it tastes like—but what is its essence? (If such things exist?) 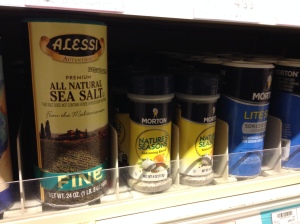 Thomas notes that Roman soldiers were paid it salt. I wonder if this was behind a phrase my step-father used to use about work. Although he and I did not get along, now that he’s gone I come back to the hidden bits of wisdom he sometimes shared. He worked very long hours, and seemed happiest when he was doing so. Early in the morning he’d limp through the house and say, “Time to get back to the salt mine.” He wasn’t a literal miner, although we lived in coal country. Salt could mean food, and the salt mine was where you worked to provide food for your family. I may not have gotten along with my step-father, but he worked hard to support a family with three kids not his own. He may have been bitter about that, but today anyone who stays with a family in hard times is considered salt of the earth. And that’s biblical.