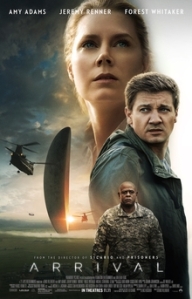 Getting to the movie theater is not only costly, but increasingly difficult to schedule. This can be problematic for someone who likes to write about movies, but the realities of the commuting life aren’t very malleable. So it was that I finally had a chance to watch Arrival, on the small screen. It had been recommended, of course, and although it’s not horror it has aliens and a linguist as the hero—my kind of flick. Once it began, I wondered if religion would play any role in the story. Alien contact would certainly rate as one of the more formative religious events of all time. The only reference that was obvious, however, was the suicide cult shown on a news story in the background, immolating themselves as the aliens became known.

Louise Banks, a linguist who has security clearance, has a sad story. Spoiler alert here! If you’re even more tardy than me you might want to fire up Amazon Prime and read on afterward! The movie opens with her watching her daughter grow up, only to watch her succumb to a rare disease as a young woman. Then the aliens arrive and she’s whisked off to Montana to try to communicate with them. It’s only after repeated encounters, learning the written language of another race, that she asks who this little girl she keeps dreaming about is. The child is in her future. The aliens see time as cyclical, not linear, and by learning their language she begins to think like them—knowing the future holds a tragedy for her. The intensity of the experience makes her fall in love with Ian Donnelly, another academic, who will become the father of her child but who will leave when she reveals the future to him.

Just as the aliens prepare to leave, not religion but philosophy takes over. A question posed by none other than Nietzsche goes: if you could live your life over exactly the same as you lived it this time, would you? Nietzsche’s point was that those who say “no” deny life while those who answer in the affirmative, well, affirm it. Ian says what he would change. Louise, however, embraces life with the tragedy she knows will inevitably come. While religion is off in a corner doing something that shows just how nonsensical belief can be, philosophy stands tall and faces the difficult question head-on. Although the movie follows some expected conventions—aliens bring peace but militaries want war—it rests on a profound question to which, I’ll admit, I haven’t got an answer.