One of the persistent dangers of being a morning person is the fact that places aren’t open early when you have to be out and about. Since my wife had to work yesterday morning, instead of spending a good part of the weekend alone, I drove her to her location. (The fact that there was a used bookstore nearby had absolutely nothing to do with it, of course.) The bookstore didn’t open until ten. My wife’s meeting started at 7:30. Much of what I have to accomplish on the weekend involves the internet and occupies me well before such late hours. Although I’m anything but trendy, Starbucks is open early and it offers wifi. And it’s ubiquitous. Kind of like churches used to be. As I pulled out of the parking lot where my wife’s meeting was being held, I found a sign saying Starbucks, this-a-way. 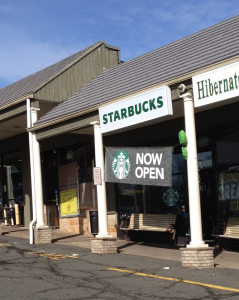 It was still early (for the secular) when I arrived. In fact, the banner outside read “Now Open.” This implied that previously it hadn’t been open, so this was virgin Starbucks territory. It was early enough that a table was actually available. I had a lot to get done, and by the time I was finished the place was jammed. In fact, when I first arrived, some of the other new patrons were joking that they would move in now that Starbucks had come to town. Groups sat in small knots for an hour at a time. People borrowed the extra chairs at my table. Countless more came in and walked out with paper mugs steaming in the chill air. I was here to wait opening time for a used bookstore. I was pretty sure I was the only one with that motive.

There are more of us out there, however. While looking for a birthday idea for a writer friend of mine I ran across a writing box online. There were several reviews. Many people lamenting on Amazon the loss of the culture of the bookstore and the hand-written manuscript. They’re the ones who review used bookstores and weep the closing of indies with authentic tears. We’re the displaced. Our society is extinct. I love old books. Touching them takes me into the past. Yes, their words are public domain and can be found online, for free. What’s missing is the thingness of it all. I’m not a materialist, but I’m even less of an electronist. My spellcheck won’t even let me keep that word. Say what you will about the old way of doing things, paper was never so uppity as to refuse the words I intentionally placed upon it. At any time of day or night.

One thought on “Morning Thoughts”