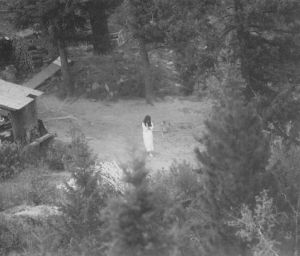 I’m still thinking about Ruby Ridge. It’s not unusual for me to be a bit late catching up on yesteryear’s news, but being alive during Trumpocalypse has made me think of the 1990s as the good old days. Jess Walter’s book on the topic, on which I posted a few days ago (just scroll down), ends with a kind of optimism that seemed possible even when George W. Bush was president—the number of white supremacist groups was shrinking radically. Americans didn’t put up with that kind of backward thinking any more. The future was ahead. Now, just about a decade-and-a-half after the book was reissued, we’ve got not only a racist commandant-in-chief, but a Republican congress who goes along with everything he says. Strangely enough, I just read a newspaper article with a Jewish Republican saying “diversity is crap” (his words). No question we’re going backwards.

It’s easy enough to dismiss extremists unless you know some. I attended a conservative Christian college in the early 1980s. There were survivalists on the faculty. These are evangelical Christians who hoard guns and supplies, generally because they believe the end of the world is coming. Ironically, their belief in the rapture doesn’t seem to assure them that they’ll be “taken up” before the trouble starts. Or maybe they just want to hang around for a piece of the action—shooting infidels must earn points with the big white guy upstairs. Most of my classmates were as appalled as I was. We agreed that if these were the kind of people who were going to be around after the smoke cleared, we didn’t want to be.

The most disturbing development since November 2016 is the move of the GOP to follow a blind leader. History will bear me out on this. It doesn’t take a prophet to see it. 45 had no plan for winning the race. Once he did, however, he knew that sheep will follow any shepherd, no matter how incompetent. All you need to do is spout racist rhetoric and the fringe will become the center. But the GOP? They are among the most sheepish of all ungulates. A “leader of the free world” who has nothing but praise for dictators and autocrats around the world? The Republican has proven to be the perfect unquestioning follower. The wool is in their heads rather than on their backs. Less than two decades ago Timothy McVeigh was executed. Today there’s no doubt he’d be under consideration for a cabinet post. I think my watch just stopped.

One thought on “Ezekiel’s Nightmare”