One of the most frequent accusations of “idolatry” I heard as a child was leveled at Roman Catholic devotion to the virgin Mary.  Lessons learned during childhood are difficult to displace, especially when they concern your eternal destination.  I overcame this particular objection, a bit, during my sojourn among the Episcopalians, but I have to confess I never felt right praying to Mary.  In my Protestant-steeped mind, there were two classes of entities involved: gods (of which, properly, there was only one) and human beings.  Only the former received prayers.  The rest of us simply had to contend with non-supernatural powers and do the best we could.  Still, I met many believers devoted to Mary, and honestly, some accounts of Marian apparitions are pretty impressive.

A local source for inexpensive advertising in our area is essentially a weekly set of want ads.  For a small fee you can advertise just about anything you want to buy or have to sell.  Spiritual or physical.  A few weeks ago, someone ran a magnanimous piece on a prayer to the virgin never known to fail.  The words of the prayer were printed, along with the instructions, for nothing is quite as simple as “ask and you shall receive.”  The prayer must be recited thrice, and thanksgiving publicly proclaimed.  A number of questions occurred to me, regarding not only this, but all prayers for divine action.  One is the rather simple query of how you can know if a prayer has never failed.  I suspect this is known by faith alone. 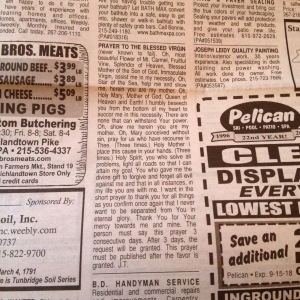 There are any number of things most of us would like to change about our lives, and the larger issue of prayer is the daisy-chaining of causality.  One change causes another, causes another, and often that for which we pray will impact another person in a negative way.  This is the classic “contradictory prayer” conundrum—one person prays for sunny skies while another prays for rain.  Neither is evil, both have their reasons, perhaps equally important.  (The weekday is a workday for many, and that’s non-negotiable in a capitalist society, so I suspect prayers for sunny skies tend to be weekend prayers, but still…)  The prayer never known to fail is either a rock or a hard place.  It’s that certitude that does it.  I don’t begrudge anyone a prayer that works.  Faith alone can test the results.  And although we could use a little less rain around here, we could all benefit from a little more faith, I suspect.  And for that there’s no fee.