The days of angry white men backlash are hopefully numbered.  One thing this strange phenomenon of privileged males feeling under threat has brought to the surface is the long struggle of women for the basic acknowledgment of human equality.  Ironically, it took a horrible war to move the cause forward.  Rosie the Riveter became a fixture during World War Two, blazing the message that women could do the tough jobs men had always done, now that males were off trying to kill one another overseas.  These images of Rosie have found new life in the era of Trumpism that has objectified women in the crudest possible ways, because it’s, well, monkey-see monkey-do in the world of politics.  Just consider Brett Kavanaugh and try to challenge the point. 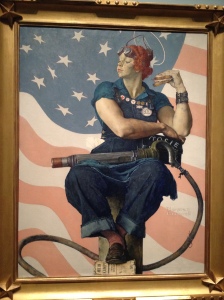 One of the more famous portraits of Rosie, back when Fascism was an evil thing, is that painted by Norman Rockwell.  A pugnacious Rosie eats her lunch with her feet on Main Kampf and her riveting gun in her lap.  (These days she would need to have her feet on an elephant rampant.)  Something about this painting always bothered me.  I could never put my finger on it.  It certainly wasn’t the confident look on Rosie’s face—she’d earned that and deserved it long before it became a reality.  Even the patriotism at that time was tasteful.  No, it was her posture.  There was something uncanny about it.  Then I learned that Rockwell had consciously copied Michelangelo’s Isaiah from the Sistine Chapel ceiling.

Isaiah, according to that famous rendition (Isaiah has never been a popular subject for paintings, for some reason), has his head turned at that peculiar angle because an angel is whispering in his ear.  Instead of a riveting gun, he’s packing a nascent Good Book, but he is receiving a direct message from on high.  I like to think it might be “The Spirit of the Lord is upon me, because he hath anointed me to preach the gospel to the poor; he hath sent me to heal the brokenhearted, to preach deliverance to the captives, and recovering of sight to the blind, to set at liberty them that are bruised, to preach the acceptable year of the Lord,” but then I’ve always been a dreamer.  Rosie, in Rockwell’s rendition, is prophetic.  She is proclaiming an equality which, inexplicably, coming up on a century later, is still unrealized.  Why?  The angry white man only recognizes God made in his own image.