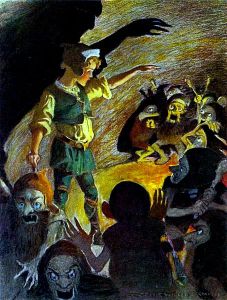 You step away from the telescope for a few months and see what happens.  That may sound like a recipe for some kind of cosmic soup, but as we find ourselves so busy with earthly matters it’s hard to keep up with the heavenly.  I’ve just been reading about the discovery of “The Goblin”—appropriate as we tiptoe into October.  The Goblin is officially a dwarf planet named 2015TG387, which falls trippingly off the tongue.  For those of us who never even saw Pluto before it was demoted as a planet, the distance of this planetoid boggles the mind.  It also makes space feel somehow less empty.  In fact, our solar system’s much more crowded than it was when I took astronomy class in college.

The universe—space—is close kin to our ideas of religion.  “God,” however defined, is “up there.”  As Galileo encouraged telescopes turned outward we began to discover mundane, if complicated, ways of explaining the universe.  Nobody looked through the eyepiece and saw the deity waving back.  Space was cold, dark, and largely empty.  Then the idea eventually grew that it was full of dark matter which, like spiritual entities, can’t be seen.  Unlike spiritual entities, however, it can be hypothesized.  Calculated, even if not measured.  And since it isn’t supernatural, it’s just fine to keep in our cosmic soup.  The problem with any recipe, however, is that it seems that each time you make it the results are slightly different.

It’s somehow appropriate that our new space neighbor is called the Goblin.  The idea of a cosmos devoid of any intelligent life—supernatural or no—is somewhat scary.  Looking at the headlines of what we’re doing to one another down here, and nobody willing to take the reins of reason, we increasingly hope for something beyond mere nature in the cold, dark reaches above.  And that we’ve found such a thing as a goblin—a supernatural entity if there ever was one—is telling.  In fact, all our planets are named after gods.  We can blame the Greeks and Romans (and even the Mesopotamians) for that.  Still, the tradition continued onto the worlds they couldn’t see: Neptune and Uranus and, for a while, Pluto.  We can’t escape the idea that what’s up there is more powerful than our minuscule human troubles.  Our slowly eroding atmosphere is all that keeps us alive down here.  And now there’s a goblin circling all around us, so far away that few will ever even catch a glimpse.