One of the persistent questions of Christianity, given that there are four Gospels, is how to account for the differences between them.  The issue isn’t unique to Jesus-followers, however, as the composition history of the “books of Moses” shows.  Discrepancies in Genesis got the whole ball rolling, after all.  In fact, once I learned about historical criticism I decided that I’d better stick to the Hebrew Bible—there are some things you just don’t want to know about your own faith.  The way doctoral programs are set up these days, you can’t specialize in both testaments anyway, although that’s becoming a lot more common among scholars in these latter days.  In any case, I was reading about the Gospel of Mark lately and the question kept coming up of whether certain phrases went back to Jesus, were coined by Mark, or had their origin in the early church.

The picture that emerges from this kind of jigsaw gospel is of Mark sitting down, pulling his sources together like a graduate student in the days before computers.  Only Mark won’t get a doctorate when he’s done.  More recent scholarship asks the question of what if Mark wasn’t really a completed book after all—we read the gospels through lenses that were ground in the eighteenth century, at the earliest.  Nobody thought to question that Moses or Mark would sit down to write a book just like anyone did then.  (People writing books on their phones in electronic form only, as they do these days, will play havoc with future historical critics and their theories.)  Maybe these weren’t meant to be finished books.  Check out Gospels before the Book by Matthew Larsen and you’ll see what I mean. 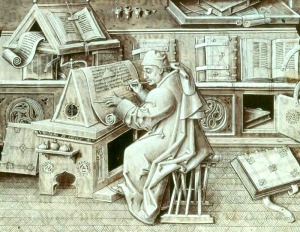 The Bible, in other words, is a very complex book.  We know little of its authors beyond Paul of Tarsus.  We don’t even know that they were setting out to write Holy Writ.  Bible is a matter of interpretation.  As I thought about Mark—whoever he was—shuffling his papers about, mulling over what it would mean to become the first evangelist, I thought how like us we’ve made not only God, but also the writers of sacred texts.  True, they weren’t worried about tenure committees, or bad reviews, or being accepted by prestige presses.  It seems, however, that they were also not thinking of what readers down the millennia would do with their words.  When it’s all done we still don’t know who said what, but at least we have persistent questions that can’t be answered.  And job security ensures that Bible reading will continue as long as there are discrepancies to debate.

One thought on “Read, Mark and”