It’s chilly in here.  What with the early onset winter and the uncertainty of being able to afford the heating bills, we keep the thermostat pretty low.  That may not be the problem with our pens, though.  You’ve probably had it happen too.  You’ve got an idea and you need to write it right down.  You snatch up the nearest pen and begin scribbling on whatever’s to hand—a bill, a receipt, the dog—only to find the pen doesn’t write.  You scratch out circles or zigzags, depending on your mood and temperament.  The pen is, however, persistent in its refusal to let any ink flow.  You grab another.  The same thing happens.  Finally—third time’s a charm, right?—the pen writes and you’ve forgotten what you desperately need to put on paper (or parchment). 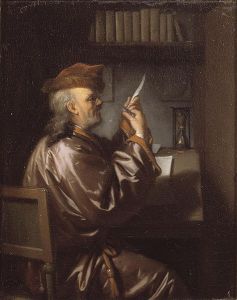 Despite wanting others to think I’m cool (I don’t see many people) years ago I started carrying a pen in my pocket.  Not just any pen, but one that would write immediately, the first time, without question or complaint.  Such pens don’t come cheap.  Then, of course, I would lose said pen.  The shirt pocket is an invitation to lose things.  You bend over and, depending on the fabric, what’s in the pocket falls out.  When it happens on a bus or plane—and it does!—your writing implement may roll away before you can reach it.  Have you ever tried getting on your hands and knees on a bus to try to squeeze down to look under a seat?  I have.  I don’t recommend it.  It’s like praying to the god of grime.  Still, I need that pen that obediently writes—I reach for it.

Some have gone the way of electronic writing.  Thumbs flying like a ninja they tap out texts so fast Samuel Morse’s eyes would pop out if they hadn’t long ago turned to dust.  I’m not a texter, though.  Those who know me know I prefer email where ten digits can work in concert and spare me sore thumbs and unintentionally brief messages that could easily be misunderstood.  No, better yet, give me a pen.  Any scrap of paper will do, but the pen is crucial.  How many ideas have died prematurely due to the pen that just won’t work?  I found a reliable pen refill.  I saved the package so that I could remember the brand.  Now I have to work out a way to have the pen with me at all times.  If the option for useful bodily modifications ever becomes a reality, a pen in the hand seems like the most practical of all.  Now what was I going to say in this blog post?