How do we celebrate Valentine’s Day when our governments advocate hate?  You have to wonder when the autocrats last fell in love.  Building entire polities on hatred harshes the elevated feelings of letting love, well, love.  The only time Republicans seem to smile is when they’re taking advantage of someone else.  But it’s Valentine’s Day, so I’ll try to think charitable thoughts about even them.

My reading recently has been taking me into the realm of sin.  Let me rephrase that—I’ve been reading a lot about sin recently.  One of the more striking aspects about badness is that it seems closely related to love, or at least lust.  I’ve often pondered why Christianity especially has tended to treat sex as bad.  While all religions take an interest in sexuality, not all of them declare it a negative aspect of life.  In fact, many see as it quite the opposite.  Since I like to trace things to their origins, I wonder why this might be.  Why did Christianity, whose putative founder declared the greatness of love, decide that although love is well and good that making it is problematic?

Paul of Tarsus, whom some credit with being the actual founder of Christianity, considered his celibate lifestyle to be superior.  While he didn’t mandate it of his followers, he highly recommended keeping their commitments to divine causes rather than to prurient human ones.  He believed a second coming was going to occur any day now, and that was nearly two millennia ago.  He was also, through no fault of his own, an inheritor of an incorrect understanding of gender and sexuality.  Even today there’s much about these that we don’t understand, but we do have more evidence-based ideas about what’s going on.  And not surprisingly, we tend to find that love is good and expressing it (appropriately) is also good.  Valentine, after all, was a saint.

Looking out my window, it’s still clearly winter.  There’s snow on the ground from the most recent storm and I’m aching from the upper-body workout that it required to get it off the walk.  But still, in the pre-dawn hours I start to hear—rarely but clearly—the birds begin to sing.  The amaryllis on the sill has sprung into full bloom.  The thing about love is that there’s enough to go around.  It’s a renewable resource.  If only our leaders showed a fraction of interest in it as they show in hate and fear. 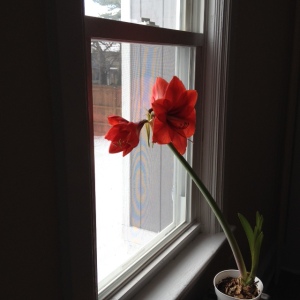