March has been designated as Women’s History Month.  Since history has been written, well, historically by males, women have frequently been excluded.  History as a serious attempt to describe “what actually happened” is a fairly recent phenomenon.  Yes, men (mostly) have been writing their views of what events meant from the days of the Bible and the Classics on.  A few females had made their way into the narratives, but reading history often makes it seem like males were the only people of consequence.  I was thinking about this the other day after I read a reference to the Red Queen in Lewis Carroll.  Chess, I realized, is a game with a message.  Now I don’t often have time for games, but this felt important. 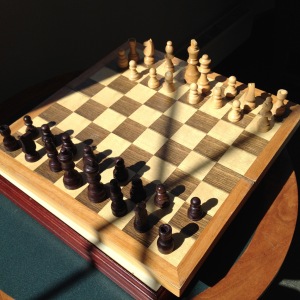 I’m not a good chess player, but I know that if you lose your queen you’ve got to be far better than I am at it to win the game.  In fact, the queen is the most powerful piece on the board.  Now if you plan to come back with something like “using the bishop, knight, and rook you can surpass the power of the queen” it suggests two things.  One, you’re better than me at chess, and two, you’re missing the point.  The queen can move in both perpendicular and diagonal lines.  She can land on either color.  The range of her motion is limited only by the size of the board.  The bishop is limited to one color square only and the rook takes two moves to equal the queen’s diagonal skills.

Think about the king—he moves one space at a time, and mostly only to avoid capture.  The queen is out there defending the realm.  Even as a kid learning to play chess, it was obvious that the queen did far more than a bishop limited to his ecclesiastical domain, or the rook with his brute force.  The knight makes a move the queen cannot, but his range in limited.  If a player retained only a queen the opponent’s king could still be captured, in my mind.  Chess should be a queen’s game.

History is a way of looking at things.  Although it involves facts—and this is where the government narrative goes off the rails; the denial of facts is an autocrat’s game—it’s not the same as facts.  History is an interpretation of facts.  The fact is that male history of the world just could not have been possible without women.  It’s time not just to acknowledge it, but to celebrate it.

One thought on “Checkmate”