I’ve tried turning it off, but it sometimes doesn’t work.  Every time there’s a system update (about every other hour, now) the new system reloads autocorrect.  True, my weary fingers are glad for the help when they just can’t spell hypocoristic, but it does seem that autocorrect, although the results are often funny, has no sense of humor.  As a writer I often use ironic misspellings.  I sometimes have my irony interpreted as ignorance, but if writers aren’t misunderstood they’re not doing their jobs, I suppose.  The thing that gets to me is that those who program autocorrect—although sometimes they’re right—can’t let us express ourselves as we wish.  The other day I wrote something with  a deliberate misspelling.  When I hit the “post” button I realized I’d been autocorrected to a nonsense word in the context.  I thought I’d turned autocorrect off.

Now don’t get me wrong—I’m not the world’s greatest speller.  Sometimes I use words with the slightly wrong connotation.  My choices, however, are generally deliberate.  Unless my device has selected them, that  is.  I suspect that autocorrect is appreciated by those who type on tiny screens.  The affluent, I notice, wear iWatches.  I wonder if they carry tiny people in their pockets whose thumbs can fly across such minuscule surfaces.  “No,” someone told me, “it has voice recognition technology.”  I was reminded of some embarrassing mispronunciations I’ve made.  In seminary the homiletics professor had an individual session with me.  “Given your educational background,” he told me, “you don’t mispronounce many words.”  Oh, but I do.  I just save them for the most embarrassing situations.

My inner critic’s a pretty active guy for his age.  He doesn’t need autocorrect to make me realize how little I know.  That’s the thing about technocrats, though.  They like to correct us based on the most common combinations of these letters.  Sometimes I glance back at something I wrote and find a word I don’t even know replacing something that was, in fact, correctly typed in the first place.  I write in a program called Scrivener.  My Mac’s too old to run Word, and Pages isn’t bad, but it doesn’t allow for the complex architecture of my thoughts (and I’m no architect; I can’t even spell it).  In other words, I have to turn autocorrect off not only on my device, but also in the individual applications I run.  But then there are days when verisimilitude just won’t flow the way it should without it. 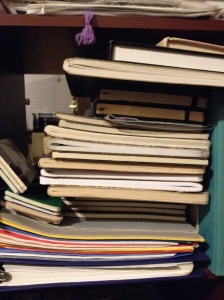