It’s sitting on the table next to my chair and I’m afraid of it.  It all started during the Easton Book Festival.  I feel sorry for those people who have to stand on the street corner and pass things out for a job.  In Manhattan I used to see them being completely ignored by swarms of people passing by.  They’re only doing their job.  I made a habit of accepting their chits, and even if they didn’t mean anything to me, I felt that the person handing them out might have experienced a small measure of satisfaction that someone accepted what they were offering, and had said “thank you.”  In Easton back in October, my wife and I were heading to one of the venues to hear an author talk and a guy was passing out paper, and I accepted one as a matter of habit. 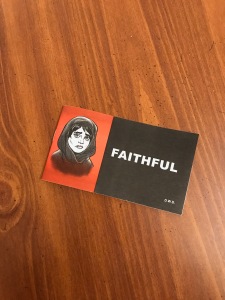 It was a Chick tract.  If you’ve been reading this blog a while you’ll have run across the concept before.  Jack T. Chick was a cartooning evangelist.  He drew hundreds of tracts and comic books that formed a steady diet for me, growing up.  Although they looked like cartoons, these intolerant, Fundamentalist tracts were quite often very scary.  Especially to the young.  More than once I’d spiral into a childhood depression after reading one.  Although it seemed simple—say the prayer at the end and you’d be saved—how could you be so sure?  The disturbing contents stayed with me long after the sixteen pages were done.  Now, as an adult, I was being offered a road back to a childhood I fervently wished to avoid.

I stuck the tract in my pocket and forgot about it.  When I got home I emptied my pockets and found it again.  Curious, I was tempted to read it.  I know, however, that doing so will only drag me back to a memory of younger days when a kind of terror permeated my days.  And nights.  My theology, which was formed of a mosaic of these tracts (what child really listens to sermons?), was a scary one indeed.  It was populated by demons, Catholics, and servants of the Antichrist.  Anyone who wasn’t straight and pretty waspish was a threat to my eternal salvation.  Is that somewhere I want to go again?  The tract sits, unread, on my table.  It reminds me of the abuses to which religion might be put.  And I’m thinking I might start refusing free handouts on the street once again.