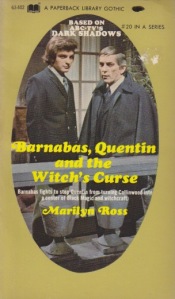 Childhood has a powerful draw.  I first started reading Dark Shadows books when they were published for (I kid you not) 60 cents.  I got them for cheaper than that at Goodwill.  Every time I read one I wonder what my young imagination found so compelling in them, but in an effort to trust my younger self I keep on.  So I read Marilyn Ross’ Barnabas, Quentin and the Witch’s Curse.  The book doesn’t really say anything about a witch’s curse, providing as it does some of the backstory for Quentin.  If you aren’t familiar with that background, and you want to be, Barnabas is a vampire and his cousin Quentin is a werewolf.  Both were made so by curses, a plight the Collins family has long faced.

In recent years I have read the 19 volumes in the series preceding this one.  They tend to be formulaic, and often show the signs of having been written quickly.  W. E. D. Ross is sometimes listed as the most prolific Canadian author ever.  He wrote over 300 books, mostly in genre fiction.  It’s no wonder many of them sound the same.  Still, I have to admit that both from watching Dark Shadows and from reading these novels as a kid, I liked Quentin.  Yes, he was smug and self-confident, but as a werewolf he had the ability to become someone else.  Unlike other books in the series, this one focuses on Quentin and points a pretty heavy finger to him being a Satanist.  That seemed pretty harsh to me.  There’s a difference between being the victim of a curse and being a Devil worshipper.

Now I know I shouldn’t take this as belles lettres.  Ross is not remembered as a great stylist, master of character development, or for being all that creative.  Dark Shadows was a soap opera—one of the more intelligent of the genre—and there’s only so much you can do with it.  Satanism was a cultural concern in the 1970s.  In the following decades it would bloom into an outright panic.  I’m pretty sure that I never read this particular volume when I was young.  Even now as a relatively mature man I found the implications somewhat disturbing.  The Scooby-Doo ending doesn’t do much to ameliorate the undercurrent of evil.  Quentin always seemed like such a sympathetic character to me.  Maybe it just goes to show what happens when you go for a quick read rather than choosing a book of substance.  Childhood can be that way.