Reading in a time of plague is more than just a pastime.  It’s an opportunity to learn.  I keep fervently hoping that an occupation might be made out of reading, but those I’ve tried always have many long strings attached, most of them tied to capitalism.  Early on in the social distancing phase, a group in my town began posting children’s stories on lawn signs in the park.  Each sign stands six feet from the last one, and if you linger a few minutes you can take in a children’s book, presumably for the benefit of your child.  Such signs have cropped up in a couple of the parks here in town.  I’m pleased to see the attempts at literacy education continuing.  If anything’s going to get us out of this crisis, it’s going to be reading. 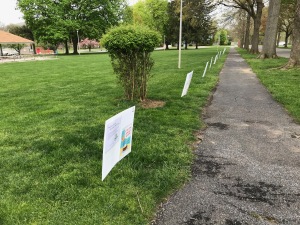 The local library, again early on, began giving away books that normally make up part of the book sale.  Libraries, which have proven their worth over and over, have been doing what they can to get people through the difficult times of loneliness, and in some cases, joblessness.  Those of us who cottoned onto reading at a young age realize just how much problem-solving you can glean from reading a novel.  Instead of encouraging writers, however, the capitalistic system makes agents and publishers interested only in those writers who are deemed to have commercial value.  All the rest, who often find a core audience after their deaths, are left to obscurity since money makes the world go round, right MC?  And yet where would we be without our formative fiction.

I’ve quite often admitted that Herman Melville’s Moby Dick is my favorite novel.  I’d always assumed that it was a success but I recently learned that it too was a flop.  At first.  There was little interest in what has become the prototypical great American novel.  Its draw is in the lessons it teaches.  A bit too long to put on signs in the park, it explores what drives some people.  Indeed, for the owners of the Pequod it is money.  But there are more important things.  As the weather has been improving, it makes me glad to see the signs of summer.  The signs posted with books.  While I have no small children to take to the park, I am made happy by the efforts of those who take the initiative to show young people the way out of any crisis.  You must read your way through.