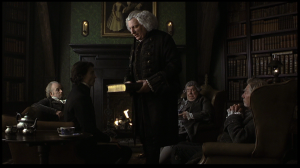 Over a recent weekend I watched four versions of “The Legend of Sleepy Hollow.”  (I have two excuses.  One is that it’s October, and the second is that I have an article on Sleepy Hollow coming out on Horror Homeroom.  For the second, read on.)  The story is one that made an impact on me as a child, probably because of Disney’s Adventures of Ichabod and Mr. Toad.  The cartoon version, which was one of the four I watched, is silly and scary both.  It leaves it to the imagination whether the headless horseman is real or not.  Before that I watched the silent 1922 Headless Horseman staring Will Rogers.  Clearly in that film the headless horseman is what we’d now call a liberal hoax.  It was Brom Bones scaring Ichabod Crane away from Katrina Van Tassel.

The canon of characters grows with Tim Burton’s 1999 film Sleepy Hollow.  Although Burton is hit or miss for me, this strikes me as one of the best October movies I’ve seen.  The headless horseman is quite real and the spiritual world intersects with the rational, crime and punishment world in the haunted western wood.  I didn’t have time for the 1980 television movie this time around, but I decided to watch the 2007 television movie Headless Horseman.  A rather puerile splatter film set in Missouri, it posits that this is the real headless horseman behind Washington Irving’s story.  It has a lot of religious imagery, which is often what I’m looking for in horror.  The writing is poor and the characters shallow, but it isn’t a total waste of time.

What all of these films demonstrate is that Washington Irving’s story, as simple as it is, really resonated with Americans.  How can you reason or plead mercy from a headless man?  Look closely, for there is a parable here.  The headless are merciless and they have the ability to frighten.  The story is generally set in the harvest season.  The 2007 movie makes the horseman’s appearance as a crucified scarecrow.  Although the original story had no such religious elements, they’ve become a standard part of its accrued cultural heritage.  The headless horseman has gone from secular to religious, for it is an American story.  Originally set in the period after the Revolutionary War, it was part of an unsettled nation’s frustrated attempt at normalcy.  This, I believe, remains.  When we can’t make sense of our surroundings, we look back to those stories that seem to have some insight into who we are.  Headless horsemen are quite useful in that regard.

One thought on “Not Sleepy Yet”