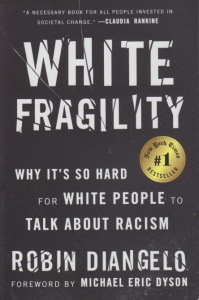 Racism is evil.  The grading of the shading of humans degrades us all.  Robin DiAngelo knows much about the subject and as we watch Trump rally the openly racist, she gives us all pause for thought.  Our entire culture is one of white supremacy.  Progressives, determined to combat it, are also part of it.  White Fragility is not an easy book to read.  It allows no escape for anyone “white” to use.  We must confront our racist culture and admit that we benefit from it.  When we try to explain that we’re misunderstood, she anticipates.  She has heard it all before.  The only thing we can do is confess, interrupt, and try to break down the system that continues to support the systemic evil we’ve embraced.

One thought occurred to me as I was reading.  No doubt DiAngelo would suggest I’m deflecting, and it may be that I am, but those of us who struggle with a perpetually low self-image, even if “white,” may not participate in feeling superior to anyone.  There are individuals whose natural assumption is the superiority of others.  I’ve experienced it time and again in my professional and personal life.  I assume the other is more adept and worthy than me.  In such circumstances a bit more carrot and less stick might’ve been helpful.  I know many both at work and more voluntary activities, for whom a word of encouragement is rare.  For those of us who assume the superiority of others, such encouragement goes far.

Even as I was thinking this I saw a post on Nextdoor.com.  The app, intended to help you find contractors or dentists or whatever, receives many posts on all kinds of topics from identifying animal droppings to alerts regarding crime.  The post to which I refer was from a security camera showing a “prowler.”  The young man seemed more to be walking than prowling to me.  His skin tone and the time of night led to a string of assumptions built on assumptions.  Since I’m often awake just an hour after the alleged “prowling” took place, I knew that were I caught on a security camera I’d merely be considered an insomniac.  Add some melanin and some racism and suddenly a walker is a prowler.  The words I was reading in White Fragility hit me with incredible force.  We have a massive amount of work to do.  “White” people have to own their history.  Own it and overcome it.

One thought on “No Way Out”