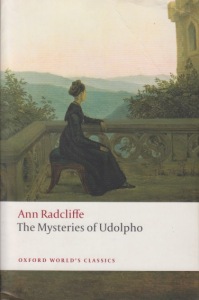 The carousels on Google can provide a great deal of information.  Looking at them, along with trusted lists of gothic novels, it became clear that one of the few classics I’d not read was Ann Radcliffe’s The Mysteries of Udolpho.  It’s been on my shelf for many years, it’s shear bulk staring me down each time I turned in its direction.  Long books are, of course, fine if they keep you going.  Knowing this was published in 1794 (in four volumes) cast some doubt on the narrative earning the sobriquet of “page turner,” and thus it proved not to be.  I’m afraid my disposition meant that the gothicness of the novel (and it’s certainly there) didn’t speak to me as I hoped it might.  There are creepy castles and rumors of hauntings.  Lots of stormy nights and damsels in distress.  Still, it comes across as the problems of the wealthy and that has to be handled well in order to not turn off this poor reader.

Still, a novel of such fame being written by a woman in the eighteenth century is worthy of note.  More than that, Radcliffe was the most successful (in financial terms) professional writer in the decade that produced The Mysteries of Udolpho.  Her literary influence is undisputed.  The novel is, however, excessively long.  Descriptive prose style was common at the time and may seem excessive to modern readers.  This is, however, impressive for an author who never traveled to the regions about which she wrote.

About 600 pages in, in the edition I read, something caught my eye.  Much of the novel consists of descriptions of mountain ranges in France and Italy.  As one party is on its way up one of the inclines, one of the gentlemen mansplains some of the geological features.  Noting that sea shells are found at such elevations, and so far from any body of water, it is noted that this is evidence of the deluge.  What’s so astonishing about this is that even in the twenty-first century that explanation still has currency among biblical literalists.  The novel appeared before Charles Lyell, who would explain the ancient ages of rocks, was even born.  We have centuries of knowledge at our disposal that we still have a tendency to dismiss.  Interestingly, Radcliffe was famous for reviving gothic literature partially by explaining away any supernatural elements.  Of course, accepting standard religious teaching of the day would pretty much have been expected.  And yet the mysteries continue even over two centuries later.

One thought on “Udolpho’s Mysteries”