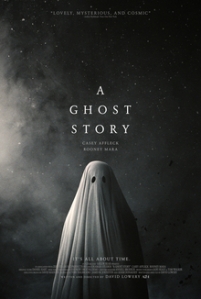 Those of us who confess to watching horror are fond of noting that the Christmas season has long been associated with ghost stories.  Charles Dickens wasn’t the first to make use of the trope and certainly won’t be the last.  After reading about elevated horror movies, I decided to watch A Ghost Story (David Lowery, 2017).  Many wouldn’t classify the film as horror at all.  It is quiet, slow paced, and has no gore.  It is nevertheless a haunting film.  I suspect its poignancy comes from a situation we can all imagine and which many people face in life—being left alone after the death of a loved one.  The idea that the dead never really leave us can be both comforting and unnerving at the same time.  The film plays to those strengths.

The premise of the film is simple: the ghost of one of a couple finds his way home and tries to reconnect with his widow.  He ends up staying there until, many owners later, the house is demolished and a high-rise is built in its place.  It’s essentially a story from the point-of-view of the ghost.  There isn’t too much dialogue included, but one significant monologue comes when a party is being held.  One of the party goers, or perhaps the current owner of the house, explains that because of what we know of physics everything on our planet will eventually be destroyed.  His beer-fueled lament is that whatever we do is therefore in vain.  He brings God into the discussion.  The ghost listens intently, but seems to disagree with his conclusions.  For someone like me the introduction of religion into the story is a Venus fly-trap, since religion and horror can’t seem to keep away from each other.

Death is a dilemma, a point that I made in a recent Horror Homeroom article on Pet Sematary.  Horror, like religion demands that we confront it.  Science can only offer cold comfort regarding the cessation of life.  Religion (and horror) open the dialog into the unknown, the realm into which mere human instruments cannot reach.  Sad and reflective, A Ghost Story hits on an essential question in the nexus of religion and science.  If a spiritual world exists, there may be some survival even of the earth’s eventual heat death.  As time passes, the titular ghost continues to learn.  Life is a learning experience, and although many modern forms of religion join in the cultural denial of death, horror is always ready to remind us that confronting it may be the wisest course of action.  Ask the ghost.  He knows.

One thought on “Ghost Stories”