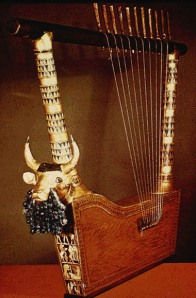 The head of Ur’s bull harp stares at me from the article announcing Penn Museum’s “Iraq’s Ancient Past: Rediscovering Ur’s Royal Cemetery” exhibit down the road in Philly. Despite recent questions of the ethics of laying off yet more academics, this exhibit beckons to those of use who’ve only ever seen pictures of the famous finds from the ancient world that we’ve spent our lives reading about. Penn’s museum is famous for its holdings from Sumer, and I’m trying to scrape together the change to go and take a gander.

Still, I was not surprised to see that the biblical angle was tied into the article as well. “The royal tombs of Ur (the city believed to be the home of the Bible’s Abraham) date to 2,600 to 2,500 B.C.” it reads. The article doesn’t go as far as to state that Abraham, not historically attested, if he ever lived, dates to at least a millennium later than Sumer’s heyday. No, Abe never strummed that beautiful bull-headed harp nor thought on Isaac as he stared at the “Ram-in-the-Thicket.” The only way to get the paying public in, however, is to play the biblical card. Were it not for Abraham, however, Sumer would likely have remained the orphan child of early antiquity.

Among the great civilizations of the Ancient Near East, Sumer failed to make it into the Bible. Its Mesopotamian successors Babylonia and Assyria marched into Holy Writ when they sacked Jerusalem and Samaria, and even the Hittites merit a mention with Abraham’s poignant loss of Sarah. Sumer was a civilization that stood on its own. No Bible story was necessary for any to see its greatness, yet there was no public interest without biblical bating. Nevertheless, this is a road-trip worth the taking. It will be nice to see the glory of Ur, even without Abraham lurking in the shadows.