It all started with Genesis. I’ve been reading Genesis since before I was even a teenager. When I began teaching it in a seminary setting, the age-old question of how science and religion fit together had become an insistent preoccupation. I began reading books by scientists who hypothesized that belief itself has a biological basis. Of course, there will never be any convincing those who believe since it is a chicken-and-egg style argument whether the body has “faith structures” because God put them there, or if we believe in God because our bodies grew them. One thing seems fairly certain, humans are “programmed to receive” what has been labeled “divine input” through the very bodies we’ve evolved. 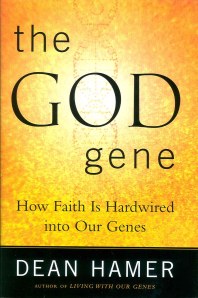 Last night I finished reading Dean Hamer’s The God Gene, the latest in a long series of such books I’ve picked up over the years. While much of the technical and statistical information was beyond the comprehension of a simple humanities scholar such as myself, it became clear that a genetic basis likely does exist for a sense of spirituality among people. Quantifying spirituality, obviously, is a task open to long and serious debate, but the general traits of spirituality are nevertheless instantly recognizable. If those recognized as spiritual share characteristics uncommon among the non-spiritual, that itch should be telling us something. Hamer tracks the culprit to the gene VMAT2, responsible in some way for the monoamines that trigger spiritual experiences. He displays the evidence for how he drew this conclusion in a scientific way, being careful to note that genetic predisposition to spirituality neither proves nor disproves God.

Since the traditional Judeo-Christian name for God consists of four letters known as the “tetragrammaton” and since the “God gene” also has four letters, VMAT, I wonder if we’re onto something here. God can’t be measured in the lab (yet), but the “receptors” for God can. Others scientists have analyzed “God nodules” in human brains that seem to react to spiritual influences. As long as religion does not object to the laboratory probing of its sacred cows, we may eventually find God in a test-tube or petri dish. Chances are he won’t be a bearded white man sitting on a golden throne, and the smart money says most people won’t worship him once he is found.

9 thoughts on “The New Tetragrammaton”