A friend recently asked why, in the canons of western art, angels suddenly made the shift from colorful to predominately white. What was behind this loss of color? The history of angel imagery is complex and a great deal of the complication derives from a generally iconoclastic sensibility in late Israelite religion. Images were frowned upon, so we do not get “Hebrew angels” recorded for us. The current-day perception of angels seems to go back to Mesopotamian Apkallu figures and Egyptian deities. In both ancient cultures various deities and demi-gods were portrayed as winged humans. The Egyptian figures, at least, were colorful. In the world of the Hebrew Bible angels are nowhere cited as having wings and they were likely imagined as being pretty much the same as humans in form. Many biblical characters mistake angels for people.

In Greek portrayals, Nike, goddess of victory, is a winged character. Eros, the god of love, also bears wings (and unlike Nike, he is generally bare all over.) In some vase paintings the Harpies are winged women. Since Greek pottery painting was generally monochromatic, we don’t have much color to go on. The earliest Christian angel portrayal comes from the Priscilla Catacomb in Rome. This angel is monochrome and wingless. The more familiar, and lavishly colored angels are Byzantine creations. Since my opinions on art history are not to be trusted, it is advisable not to make too much of this, but Byzantine art made flamboyant use of saturated hues to bring glory to God. This is part of the tradition behind Orthodox icon writing, and angels were simply following suit.

In the Middle Ages in Europe, angels were widely used to represent good and evil. It would stand to reason (if not to art-historical standards) that “good angels” would show their goodness by donning white apparel while “evil angels” would take on darker garb. This also fits with the growing tendency to represent Satan as dark red or black in color during this time period. As angels symbolized goodness, they became bleached of their former, Byzantine color. Symbolic value outweighed aesthetic sensibilities. Today angels retain their ancient legacy of Mesopotamia, Egypt, and Greece. Wings fit the view of angels as messengers, although ancient ideas of their colors depended more on the artistic conventions of the culture than any attempt to be true-to-life. 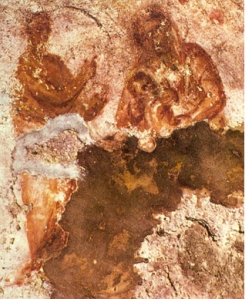