Last night my family attended a performance of CATS. We can seldom afford shows, or even movies for that matter, but when CATS comes to town it is non-negotiable with my daughter. It is a must-see musical. Anyone who has seen the show knows it is all just for fun with only the thinnest of plots and the most colorful of non-religious characters (they are, after all, cats). T. S. Eliot and Andrew Lloyd Webber, however, were/are solidly C of E, and that orientation comes through in both some of the characters from Old Possum’s Book of Practical Cats and the arrangement of the poems into the lyric of CATS. The basic message of the show is redemption, but the angle that I particularly noticed last night was the mosaic aspect of Old Deuteronomy. 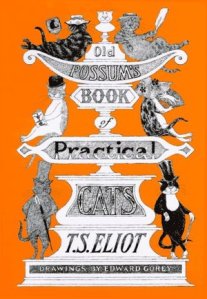 Old Deuteronomy, the patriarch of jellicle cats and father of many of the cats in the junkyard, is a hobbled, old character who assumes the aspect of a law-giver to the younger generation. He has been to the Heavyside Lair and knows the path there. He leads Grizabella to her rebirth with the Everlasting Cat. Even his name suggests his association with the Torah, famously summarized in the book of Deuteronomy. When he is kidnapped (cat-knapped?) his return leads directly to the culmination of the show, the return to Mount Sinai.

No one would claim that CATS contains a profound religious impact, and yet the show conveys an unexpected emotional power. T. S. Eliot was not particularly known for his religious poetry, yet his personal beliefs permeate the children’s poems that form the basis for the show. His Moses is non-judgmental, a cat who was quite frisky in his younger years and who knows the value of a life well lived. A cat that believes in second chances. That simple message kept audiences returning to Broadway to see CATS on its incredibly long run. For those of us whose careers have run aground in mid-course, a Moses more like Old Deuteronomy would be a hopeful religious leader indeed.