In March alone I had to build expanders for three of our bookshelves. I claim the problem began when, as a faculty member at Nashotah House, I had use of a house with a built-in, floor-to-ceiling library. My wife claims the problem began long before that. We own a lot of books. The only silver lining to Borders’ recent bankruptcy was that we hovered like buzzards at one of the closing stores and walked out with books we might not have otherwise bought, but whose prices demanded their owners find a new home. Orphaned books are a sad sight. So I purchased my first Christian satire book in many a year. I just finished reading Becky Garrison’s Jesus Died for This? A Satirist’s Search for the Risen Christ. Having spent many years among the Episcopalians, Garrison’s point of view set me at ease: had this been an evangelical attempt at humor I would have orphaned the book myself. Nevertheless, as I read through this travelogue/memoir, I rarely found myself laughing. 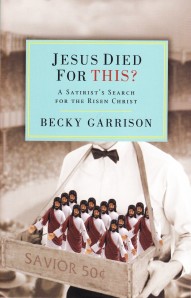 Nothing robs one’s sense of humor quite like being in higher education for a couple of decades. I still find plenty to laugh about, but I realize the reprieve is only temporary before more serious issues once again cloud the skies. Garrison’s attempt to find genuine “Christ-like” behavior among Christians was, predictably, peppered with the failures to find it. As she repeatedly notes, the odd marriage of religion and politics in the United States has tainted both institutions (and both had already tainted themselves without the other’s help many times previously). It doesn’t take a satirist to see that many religious figures have made a joke of their belief systems by touting them as the only way to heaven.

What became increasingly clear to me as I read this personal and revealing book was that Christianity has splintered into countless subcultures that attempt to reclaim the original Christian experience. The problem is that time doesn’t stand still. Religions are, by definition, conservative. Progress, by definition, is not. Ever since the first hominid hefted a wedge-shaped rock and used it as the first Paleolithic weapon, our course was set. We would continue to try to improve our lot. Institutionalized religions began appearing a mere six-to-seven thousand years ago, very late in the game, and they’ve been driving with feet firmly on the brakes ever since. Once we figure out what the gods want we need to – wait, don’t change that! We’ve just figured it out! So we find ourselves in a highly technological twenty-first century with pre-medieval religions trying to tell us how to survive the Black Death. Each time religions change, some get left behind. When we finally implode, some future archaeologist may find an apartment crammed full of books and she’ll declare that my wife was right: the problem began long ago.