Finishing Charlotte Bronte’s Jane Eyre last night proved timely from the point of view of today’s much anticipated apocalypse. (I hate to leave a book unfinished as the final trump begins to sound.) As I stress to my students at Rutgers (when I actually have a class), the Bible surrounds them whether they are aware of it or not. Quite aside from the present rapture-envy—that one’s just too easy—reading literature of the nineteenth century is an excellent way to show the Bible’s influence on western culture. Jane Eyre is suffused with biblical allusions and direct references, even with the faulty theological notions that the Scriptures had hatched in that century. Of course, the Bronte sisters, all successful novelists, were the children of a clergyman, but other writers of the period demonstrate an equally biblical worldview. In fact, much of the dramatic tension in the present novel revolves around distinctly biblical issues.

Interspersed with my reading of classical novels, I read many more recent literary explorations as well. A couple of weeks ago I completed Stephen King’s It, not a particularly favorite novel, but one that at times demonstrated that even masters of the macabre frequently draw on the Bible. For modern literature the Bible is the ultimate foundation. It would be interesting to live long enough to see if it still has any relevancy at the end of the present century. Jane Eyre, perceptive as most nineteenth century novels are, also pressed directly the wound that currently afflicts much of our nation. Cast upon misfortune, Miss Eyre is mistaken for a beggar. Miss Bronte observes, “Prejudices, it is well known, are most difficult to eradicate from the heart whose soil has never been loosened or fertilized by education,” a line that should be emblazoned upon the door of public officials who feel it is their right to withdraw funding from public education. You want an apocalypse? That’s the recipe right there.

Nevertheless, Miss Eyre presses on until she reclaims the man who had once “stood between me and every thought of religion,” dodging an impassioned missionary along the way. In revealing the manipulations of the cousin who dies on the mission fields, enriched by Miss Eyre’s beneficence, once again Charlotte Bronte displays her perception of how the church may ultimately rob a soul of its true potential. Upon learning of his death, the now Mrs. Rochester ends this penetrating novel with his words, strangely appropriate for this day of fictional endings: “’My Master,’ he says, ‘has forewarned me. Daily he announces more distinctly—“Surely I come quickly!” and hourly I more eagerly respond, —“Amen; even so come, Lord Jesus!”’” Of course, St. John is here quoting Revelation 22.20. Since I am scheduled to run a 5-K in a couple of hours, if the second coming is about to happen, it would be convenient should it transpire before I end up exhausted in my own personal apocalypse. 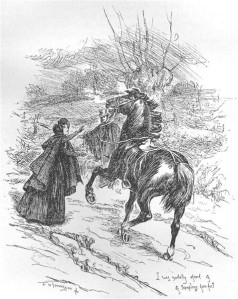 Jane Eyre stopping one of the horsemen of the apocalypse?

2 thoughts on “Eyre the Apocalypse”