All the build-up for Hurricane Irene masks a deep-seated fear of the uncontrolled. If the storm devastates anyone, there will be Biblicists who say, like Job’s friends, that they must have sinned. Such pronouncements accompany nearly every natural disaster, as if God is huddled over the globe attempting to concoct more horrid and sinister ways to punish sinners. Natural disasters, however, have a way of effecting good and bad alike, just as the benevolent sunrise and the soft kiss of the rain (both according to someone mentioned in the Bible as being the son of someone important). But when danger looks down its barrel at human communities, they don’t neatly divide into sheep and goats. All people are a mix of virtuous and vice-ridden in varying ratios, and only the God of the Marquis de Sade would slam the iron maiden shut on all alike. The East Coast saw this earlier in the week when a benign earthquake shook our world. Barely had the ground stopped trembling before we were informed it was divine punishment. For what, no one could really say.

Interpreting nature according to the Bible is so misguided that it is difficult to know where to begin the critique. Yes, some biblical writers with a flare for the dramatic will claim that Yahweh was behind some disaster. Of course, they had no concept of science, in this case, meteorology, upon which to draw. Nature acts in unexpected ways because God has his fingers in the bowl. Even the early church gave up on that way of interpreting things as soon as natural processes could substitute for God. When religion because politicized, however, we started to see a backlash of backward thinking. It is a simple enough deception to utilize. People fear natural disasters, and the politically savvy know that few have any theological training. You can very easily encourage panicked masses to follow you if you claim to have read the Bible. From years of teaching it, I can certainly affirm that many clergy have not read the whole thing. Yet we use it as the barometer of divine wrath.

I, for one, am not worried about Hurricane Irene. As New Jersey has zigzagged in and out of the predicted track of the storm, it seems as though God may be wavering. If it misses the politically astute will say it is Chris Christies’ righteous policies of helping the wealthy at the expense of the poor. If it hits they will claim it is the sinfulness of the liberal camp that led the winds this way. It is all wind. Having written a book-length manuscript on weather in the Psalms, I know a fair bit about biblical perceptions of weather in the world of ancient Israel. Although over-zealous translators ill-informed about meteorology used to translate a word or two as “hurricane” the fact is that biblical Hebrew has no such word. Due to the rotational direction of the planet (about which they also did not know) hurricanes never hit Israel. Herein lies the basis of my confidence in the face of Irene. If the Bible doesn’t mention hurricanes, they can’t possibly exist. Literalists up and down the coast should heave a sigh of relief. But just in case, I have stockpiled several gallons of water, right next to my Bible. 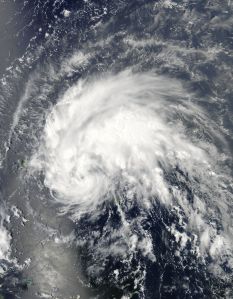 Good morning, Irene -- if that is your real name.

3 thoughts on “Calm Before the Storm”