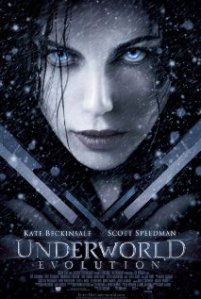 For constructing a mythology teeming with monsters, I must doff my metaphorical hat to the Underworld series of movies. Unrelentingly Gothic and stylish, I’ve watched the first two installments a number of times, but I have yet to see the last two (the latter of which is still currently in theaters). I have to admit that seeing Kate Beckinsale in her werewolf hunting gear two stories tall on midtown electronic billboards is some enticement to catch up with the story. Over the weekend I rewatched Underworld Evolution, number two in the set, to refresh my mind of the story. Quite apart from the implicit religiosity of vampires, the Underworld movies, while eschewing crucifixes and religious origins for vampires (which Bram Stoker’s Dracula by Francis Ford Coppola narrates to an explicit extent), nevertheless partake of the power of religion amid all the shootouts and weird transformations.

In Underworld Evolution, Marcus, the son of the original vampire, in a scene straight from Christian mythology, has the devil rebelling against his creator. As he is killing his powerful yet ineffectual father, Marcus predicts the beginning of a “new race created in the image of their maker—their new god. Me.” As he says this he has his own creator impaled on a demonic bat wing. Running him through with a sword he states, “And the true god has no father.” I admit I’ve been trying to read some post modern treatments of monsters, and this kind of reversal fits well with the conflicted outlook of the twenty-first century. Who is god? The good or the evil? The old certainties have grown gray and blurry. No wonder some people are uncomfortable.

Perhaps the most religious element in the film, however, is blood-memory. Blood is a cheap commodity in horror films, but it represents, in the Abrahamic traditions, life. In the Christian sense drinking communion wine is to consume the blood of Jesus, or at least to remember his death (the fancy word is anamnesis). Vampires, in Underworld Evolution, remember the lives of those whose blood they drink. The taking of life has a sacramental quality to it here. To a world less immersed in a Christian worldview, this concept might seem more macabre than it already is. Monsters often take their cues from the gods. So on a February weekend some of this feels terribly familiar. It may be a small underworld after all.