The tragedy outside Oklahoma City transcends petty human differences. Tornadoes, no matter how we dress them up, look like the wrath of God incarnate. The fifteen years I spent in the Midwest were filled with literal nightmares of tornadoes and even a few hours spent cowering in the basement. Such phenomena remind us that we are quite small in the face of nature, and the news reports are full of religious sentiment as people want assurance that God hasn’t abandoned them. Nature doesn’t favor humans over anything else that happens to be in the way of whirling 200 mile-per-hour winds. Even one’s belief might get blown away. Yet it doesn’t.

Although a tornado hit New York City last year, my terror of the storm evaporated when we moved back east. In the Midwest, although there were hills, I felt so exposed under the open expanse of the heavens. In the utterly flat part of central Illinois, I recall some truly awe-inspiring storms. The sky was so ubiquitous and overpowering, and you could see clouds towering thousands of feet over your head, throbbing with constant lightning. It was then I began having the idea for my book on weather terminology and the book of Psalms. Humans helpless in the face of nature. This is the raw material of religion. Like children we pray to God to make it go away. Storms do not obey prayers. 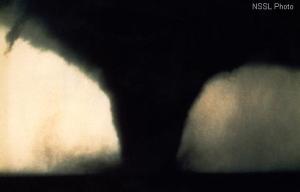 By their very nature tornadoes are capricious. We like to believe the good are spared and the evil punished, but as schools are destroyed and children killed we have to face the cruelty of nature. What happened in Oklahoma was a random act of nature, as much as hurricanes Andrew, Katrina, and Sandy were. We can’t help, however, any more than the people of the Bible, supposing that God must somehow be behind the weather. We may influence it, as global warming has repeatedly demonstrated, but seldom for good. And when we look for the divine in the fierce winds, we will end up facing tragedy.