I recently had the misfortune of flying on Delta Airlines. In all honesty I suppose my antipathy to Delta began with a flight on which I was not actually a passenger. A few years ago a news story of a Delta flight navigating to the wrong city created smirks for those who can afford to fly airlines that have better track-finding skills. With all of my flying over the past years, I’ve ended up on Delta a couple of times and my sense of their muddled thinking has only been confirmed. On a recent flight before which we were informed that our boarding would be “expediated” since the captain was late landing his jet at the next gate and would be flying right back to Atlanta whence he’d just arrived, I hoped the navigation would be better than the grammar. Landing in Atlanta for a flight to the thriving metropolis of Allentown, Pennsylvania, the gate agent repeatedly told us that the flight to “Aberdeen” was about ready to board. Several customers had to call out “Allentown” a few times before the agent realized her mistake. My misgivings grew. When I landed in Allentown, my checked bag had decided to take a tour of Detroit. It was late at night and I might have been a bit brusk with the poor, graveyard-shift Delta agent, but he assured me that my bag would be in by noon the next day.

Not a particularly trusting soul any more, I called Delta baggage information the next morning after looking at their website. The website showed the bag sitting just 15 gates from my departing Atlanta flight but then taking off to Detroit. When I called the representative told me that no information was available on my baggage (the artistry of understatement!). I informed her that I had the website up and that it showed my luggage in Detroit, I wanted to know when it would be in Allentown. Her tune changed to indicate, “oh yes, it is in Detroit.” But then, she could neither confirm nor deny that it would be on its scheduled flight. I had already determined to drive back to the airport to collect it. If Delta cannot be trusted to navigate to the right location in the air, then what would be their chances be on the ground in New Jersey? As I kindly suggested to the representative that they hire employees who could read, I couldn’t help but think of Schrödinger’s cat.

Erwin Schrödinger was the physicist who came up with the thought experiment of a cat placed in a box with a deadly substance. Whether the cat is alive or dead is only a matter of speculation without looking in the box, so, in reality, the cat is both alive and dead simultaneously. I’m no physicist, but I thought of Schrödinger’s luggage being both in the cargo hold and not being in the cargo hold at the same time. This was the very mystery of the universe, courtesy of Delta’s ineptitude, being foisted upon my frantic brain. Where was my bag? It was not in my possession, and I had last entrusted it to an airline that thought the best route from the Midwest to Allentown was through Atlanta and then Detroit, but they weren’t really sure if that was the case either. There is a consolation, however. You can get a refund of your twenty-five dollar baggage misplacement fee, in the form of a voucher for your next lost luggage episode on Delta airlines. I’m about ready to crawl into that box with Schrödinger’s kitten and await my fate. 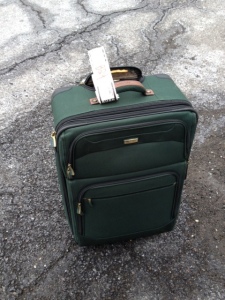 Both here and not here.