I don’t remember what year it was, but I remember precisely where. On one of my countless trips out back—to or from school, to burn the paper garbage, pet the dog, or wander in the woods—I noticed something poking out of the dirt. The path between my step-father’s house and garage was well-traversed, and a little rise there was bald at the top, and what I saw emerging from its underground lair was round and dull. I’ve always had fantasies of buried treasure, so it is difficult to pass by anything suggesting a coin on the ground. This turned out to be a button. Not a regular, button, however. This was clearly military, and old. It was just appearing from a long rest under the ground and I didn’t know how long my step-father had lived in that house, but it had obviously been many years. There was no internet those days, but it soon became clear from my amateur researches that this was a Civil War era button. It still had a scraggly bit of dark blue thread attached. I never bothered to dig to see if the rest of the soldier was there.

Western Pennsylvania, while far from the striking Revolutionary history of the eastern part of the state, had seen its share of military transients. George Washington had established a fort in nearby Franklin, where I was born, and I was sure that more than a few Civli War soldiers had tromped through this area, although it was far from Gettysburg. I treasured that button and kept it with the very small coin collection I had amassed. It just so happened that our minister was also a coin collector. He took me to coin shows and we would sometimes exchange old pennies. One day he told me about his button collection. I mentioned my find, and he showed a great interest. In fact, he promised he’d complete my wheat-back collection from 1909 to 1958 in trade for my button. He ended up with my button, but never finished my penny series before some bishop shipped him off to another parish. History had slipped through my fingers. 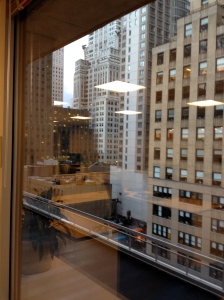 Patterns are reinforced by repetition. One of the severe beauties of Manhattan is the rows and rows of identical windows. Patterns also persist in time. I stopped collecting coins ages ago, but I still squirrel away any wheat-back that lands in my pocket. Even in average condition a “wheatie” is worth double its face value. But face value is not always what it seems. Value lies in that in which we invest ourselves. I followed my mentor to seminary only to find myself traded off for many a finer specimen. Uncirculated, likely. This particular piece had been scuffed and banged against others so long that the patina warned that more might be hidden than meets the casual eye. And somewhere in rural western Pennsylvania there may be a dusty corpse just waiting to be discovered. Victims of war come are sometimes just beneath the surface.