As a child, Memorial Day signaled the start of summer. Most of the time it announced that the obligations of school were nearly over and that was sufficient cause to celebrate. It was not until well into adulthood that I realized the holiday commemorated those who’d died in the armed services. I’d noticed the flags in cemeteries, of course, and we often visited the graves of civilian ancestors buried close enough to reach. The message did not penetrate my head, however, that all of those little flags should be telling me something. I grew up not knowing my father, but I did know he was a veteran. When all his children gathered for a (mostly) impromptu picnic yesterday, for the first time in well over thirty years, I realized how much of a mystery he was to me. At his funeral the flag on his coffin was presented to my older brother as part of military tradition, although he had died in peacetime, and pretty much isolated from all his progeny. It is a somber thought even now, although it was eleven years ago.

I have been a pacifist since my youngest days. Sure, I played with toy guns and G. I. Joe, but that was the culture of kids growing up during the Vietnam War. Only vaguely did we realize the actual horrors that were happening daily thousands of miles away. In my mind there was no reason to go to war. In Sunday School we were taught to settle our differences nicely, even if it meant that you had to be cheated or take less for yourself. This always seemed the central tenet of Christianity to me, and I wondered why the most conservative of Christian presidents seemed the most hawkish, the most ready to sacrifice the fathers, sons, brothers, and now mothers, sisters, and daughters of others for so little. The number of flags even in that little country graveyard where my grandparents were buried haunt me.

We still have members of the armed forces over seas. The military budget of one of the most prosperous nations on the planet is astronomical. We can now kill with drones so that we don’t even have to see the carnage we create. When did the lives of young adults become small change? I know it’s idealistic of me, and probably terribly naive, but I still can’t make sense of our cultural perception of how cheap human life can be. Maybe I’m just a little overly sentimental about a father I never really knew. But looking over my siblings, I see that he produced some nice, generous, and peace-loving children over half a century ago. And while we have our picnics and enjoy a rare day off of work or school, thousands of silent flags will be flapping in cemeteries all across this country reminding us that better ways exist to resolve our differences. If only we could take a holiday from war and violence we might see fewer flags and even more holidays. 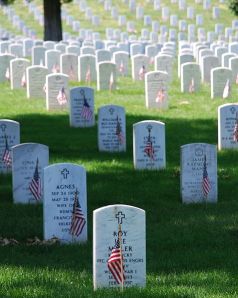