Just as it is appropriate for news sources to carry religious stories without ridicule in weekend editions, October is the month when strange things might be reported with a degree of seriousness. I have often noted in the past that “paranormal” (think X-Files) phenomena are closely related to religion. Since our ruling paradigm is one of belittling the intellects of those willing to consider evidence beyond the accepted, news stories featuring the unexplained do so with a generous helping of scorn. I was amazed, then, when my wife sent me a story on the BBC News Magazine from the World Service Sport section. (Which is near enough to paranormal, as sports fail to interest me in the least bit.) A story by Richard Padula is entitled “The day UFOs stopped play.” Near this date in 1954 in Florence, Italy, a soccer game stopped as UFOs appeared above the stadium. Former World Cup players stared upward instead of at the ball. The event was documented and never explained. I kept waiting for the jowl-waggling punchline. It never came. Here was a news story from a reputable source taking something strange at face value.

Paranormal activities and religious experiences are in the same category when it comes to a materialistic universe. They can’t exist and so the superior mind must laugh them off, stating they are an illusion, hallucination, or hoax. They still happen, nonetheless. Some world governments are beginning to announce to their citizens that they recognize unexplained arial phenomena exist and—truly astounding for government rulers—they have no explanation. Something weird is going on. It was on Halloween Eve in 1938 that Grover’s Mill, New Jersey, was invaded, according to an Orson Welles radio play. Since the inexplicable panic that came following that broadcast, extraterrestrial visitors have been laughed off the serious news page into the comic section. News stories have never taken it seriously since. 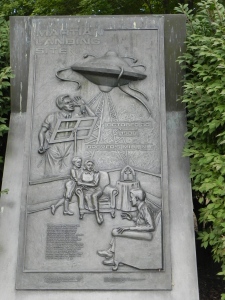 A sports writer, casting about for an interesting story, might well focus on an event of such Fortean dimensions. Some highly respected people present at that game were interviewed with utter seriousness and traces of physical evidence were even gathered. A substance whimsically called “angel hair” was found all over the city, and despite the chemical signature, was declared to be the webs of a massive spider invasion (who needs aliens to be scared?) by many scientists who didn’t witness it. Laugh and the world laughs with you. The BBC doesn’t seem to be laughing in this story. Tomorrow is Halloween, when many improbable things seem possible, if only for a short time. Weather balloons, swamp gas, and Venus notwithstanding, sometimes people of normal intellect turn their eyes to the sky and wonder.

2 thoughts on “The Wars of the Worlds”