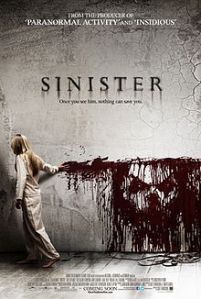 I confess. I’ve fallen behind on my horror movies. My work schedule doesn’t allow for much down time, and on weekends when I spend time with family, well, horror films aren’t their favorites. So on a weekend afternoon when I was alone, I finally saw Sinister. I remembered seeing ads for it a few years back, but far enough back that I didn’t know what to expect. As I’ve often asserted on this blog, horror frequently draws its spookiest material from the deep well of religion, and Sinister once again emphasizes this point. With clear connections to The Shining and Ringu, Sinister does keep you in its web. Of course, ritualized murders are by their nature scary, since those who perpetrate them have taken leave of reason. I don’t read true crime because I have to sleep, and I’d rather not know what some psychopath has eating his brain as he plans his sacrifices. So it comes out in fiction.

The protagonist, crime-writer Ellison Oswalt, consults with a Professor Jonas, whose name those acquainted with the Bible can’t separate from Jonah, to find out about ritual crimes. Jonas informs Oswalt that the occult symbols found at a couple of the murder sites are unconventional. He eventually traces them to Bughuul, a Babylonian deity that eats children. The religious element couldn’t be clearer. Bughuul, who is a god fabricated for the movie, is effectively frightening in the film. But for the ritual element to the murders, the story might have passed as just another gruesome offering to audiences who want a little fright in their October. Religion makes it scarier.

The second appearance of Professor Jonas reveals that, like Ringu, watching the films that tell the story is dangerous. He delves into iconography. Icons, according to orthodox tradition, take part in the reality they represent. Bughuul knows that, and merely by watching the films, or looking at pictures (icons) you open a portal between his world and that of the viewer. By the time Oswalt learns this it is, of course, too late. Again, the element of terror is introduced through religious thought. Bughuul (Mr. Boogle) is a morbid iconographer. The reality of the evil is represented in the “artwork” itself. Once you’ve seen an image, you can’t unsee it. So it is that Sinister draws on religion to plumb the depths of fear. It is surprisingly effective, even on a sunny afternoon when I’ve had too much time alone.