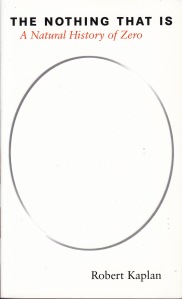 Philosophy, it used to be said, was the handmaid to theology. According to some among the scientific establishment the whole lot should be thrown out, baby, bath water, and tub. It has always distressed me to read scientists dissing philosophy (theology I can understand). Empirical outlooks are definitively based on a philosophy, and no matter what we may think of post-modern theorists, we are indebted to philosophers far more than we probably realize. I just finished reading Robert Kaplan’s The Nothing That Is: A Natural History of Zero. I noticed the book when it was first published, but found it recently at a book sale for almost nothing. I’m glad I did.

I can’t pretend to understand all the equations in the book. There aren’t that many, thank goodness, but Kaplan uses them to make his point. He shows, through a combination of history and logic, how zero has made our modern world possible. One of the features that immediately stood out is how often religion entered the discussion. Kaplan isn’t hostile to it, he merely notes that some theologians resisted it along the way while others declared that nothingness was necessary and inevitable. Likewise philosophers. And mathematical proofs lead into some strange neighborhoods when zero’s your traveling companion. Indeed, some chapters of this little book so resembled philosophy that it was easy to forget a mathematician was our actual guide. I took some advanced math in high school that I survived only with the aid of my brother, but this book helped to make some sense of a past largely forgotten.

Science is all about numbers. Quantification. In fact, many scientific theories would simply fall apart without the math to back them up. A scientist learning math, as Kaplan demonstrates, is learning a philosophy. Even in the strange world of quantum mechanics, we’re told, the math holds up. We wouldn’t even know about some worlds if it weren’t for the equations. If math is near kin to philosophy, how can any right-minded scientist reject philosophy as nonsense? Isn’t this, logically, rejecting the basis for your own quantified discipline? And, if I may be so bold, philosophers generally acknowledge that their discipline has a, perhaps estranged, relationship to religion. If we look at it holistically instead of calling each other names, we might come to see that knowledge comes in many forms. Perhaps the most unexpected among them is that of the lowly zero.

One thought on “All for Naught”