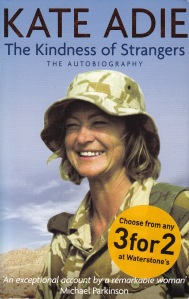 What do you want to be when you grow up? The question kept recurring as I read The Kindness of Strangers. The name Kate Adie may be more familiar to readers from the UK than to those from the US. While spending three years and a bit in Scotland, my wife and I grew accustomed to hearing her name as a reporter with the BBC. I’ve just finished reading her memoir and it brought to mind several points that hit quite close to home. Apart from being engagingly written, her biographical essays highlight the difficulties women still face in much of the world. As a journalist, Adie traveled to many vexed locations where some expressed surprise that a woman would have such freedom as to run around with men, investigating, reporting, and being seen by many, many viewers. Meanwhile, those she sojourned among had to deal with oppressive regimes, low standards of social justice, and, not infrequently, the fear of rape. It is a poignant and at times maddening account. Men the world over seem to share a horrid, deeply ingrained and reinforced concept that women are somehow there to serve them. Here we are in the twenty-first century and we’re still struggling with basic biology.

If I might tear myself away from that particular observation for a moment, I also found Adie’s firsthand accounts of the atrocities she witnessed deeply troubling. In this day of Holocaust awareness and the belief in human dignity, it is distressing to see how cheap life is under many governments in the world. How humans can be so inhumane boggles the mind of those with any sense that we’ve somehow evolved. Often the hatred is based in differing religious outlooks, but often religion is only an excuse. The offending religions that are touted almost all teach the descent treatment of your fellow human beings. Sadly, nothing appears to have been learned from the all-too-intentional violence of the past century. The real issue, reading between the lines, is power, not faith. It is easy to have a scapegoat, and some analysts (not Adie, I would emphasize) like to suggest a simple solution by placing their hands on the head of religion and confessing the deadly sin of being human over it.

The book, I should add, is not all gloom. Adie is witty, sophisticated, and a charming writer. One of the positive takeaways I had from her life story is that the question “What do you want to be when you grow up?” is all wrong. Adie never wanted to be a journalist, but through a series of circumstances eventually found herself one. A much decorated and honored one, no less. This is a lesson for our time. The old stabilities of choosing a career and staying with it seem to have eroded from beneath us. It is increasingly difficult to plan ahead for an uncertain future. Adie is a fine example of how to adapt along the way. More than that—and men pay attention here—she’s an exceptional example of what it means to be human. This is what we should all strive to be when we grow up.