Although today is Easter for some, for many it generally isn’t. And I don’t mean just those who follow faiths outside Christianity. One of the hallmarks of religions is their tendency to fragment like a sugar egg under Thor’s hammer. Christians have long disagreed on the date of Easter depending on which time reckoning scheme they follow. That which makes it onto most work calendars is the first Sunday after the first full moon after the Vernal Equinox after the Gregorian calendar. After all those afters it’s easy to get confused, but the fact is this kind of precision makes it possible to date Easter until the Earth slows on its axis or Mitch McConnell learns to look at things from someone else’s point-of-view, although we all know which is more likely. This year, in a rare coincidence of the Gregorian and Julian calendars, however, Orthodox Easter is the same as Catholic Easter. Could it be sign of hope?

You see, calendars aren’t just markers of time. They’ve always been religious devices. In fact, our current calendar, the Gregorian, was introduced by Pope Gregory XIII. The world still marches to the beat of Rome’s drum. Nature, it seems, is indifferent to our calendrical needs. The point of all this time keeping was to help those who lived by the soil to know when to plant and when to harvest. That might seem simplistic, but if you follow how it feels outside there would’ve been some sowing going on in February around here. Global warming, for those who’ve advanced to the Gregorian calendar (that’s okay Mr. McConnell, you may leave the room) will throw that off, and maybe we’ll be needing a new calendar. Will we retain the one with it’s pagan month names or shall we adopt one with months of evangelical heroes? But wait, not all evangelical groups celebrate Easter!

I had a college roommate who believed all holidays were of the Devil. His sect of Christianity didn’t celebrate Christmas or Easter. So even as Orthodox and Heterodox join together in recognizing today as Easter, not everyone’s together on that point. Some mythologize bunnies and eggs while others dismiss them as hopelessly pagan. So it is that we have to agree to disagree. Teach the controversy, right Mitch? While some celebrate resurrection today others put their Peeps in the microwave just for the fun of having that kind of power over the weak. 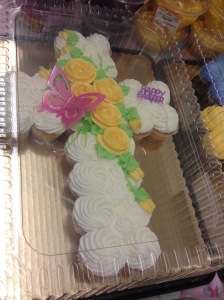 Having your cake, and having it too.