I can tell I’ve been too busy when I haven’t planned for Banned Book Week. A kind of unofficial holiday since, well, it’s about banned things, the point of this observation is that we should be free to read. A fairly large portion of the fiction I read anyway, at one point or another, ends up on the banned list. Not surprisingly, most banned books have diversity content—racial or sexual minorities portrayed in sympathetic ways. Trump has shown us clearly how dangerous such thinking can be. It’s well known that such perspectives are allied with some evangelical Christian interests, or, perhaps I should say, lack of tolerance. There are lots of ways of looking at the world out there, and many of them aren’t evil. I should’ve planned ahead.

Censorship implies a certain arrogance. One way of looking at things is right and all others are wrong. Although we all know that any logical system runs up against its limits (we call them paradoxes) we’re reluctant to let go of that which we suppose, with or without justification, to be right. Banning is an effort to control minds. It’s no coincidence that many of the titles on banned and challenged lists are intended for younger readers. Those who favor censorship want to close the eyes of the young and pretend the real world will just go away. Yes, many of the banned books are fiction, but fiction tells us truths. Those who ban books are uncomfortable with such truths. That’s not to say all literature is created equal, or that all banned books are great literature. As someone who writes fiction, though, I can attest how difficult it is to get it published. That in itself tells us something.

It’s banned book week and here I am without a banned book to read. I’ve got some ideas, of course. My wife and I both take on book reading challenges each year. One of this year’s books (at least) was a banned title, but one that I read too far in advance. Besides, although we have too many books in our apartment already, I used Banned Book Week as an allowance to go to the bookstore. What better way to fight literary fascism than to buy a book? The problem is deciding which one. The lists are long and grow longer each year. Intolerance, it seems, knows no limits. I’m about to do my civic duty for this time of year. I’m about to go to a bookstore and buy a banned book. 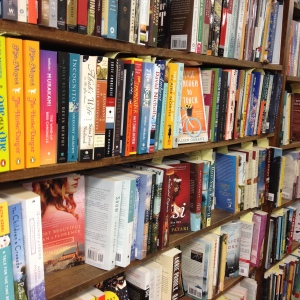 One thought on “Sense or Ship”