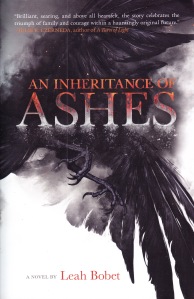 I once told someone that a book I was reading was a “good autumn book.” The friend looked at me quizzically and asked what I meant. Seasons have a feel to them, even as books do. When the days grow shorter and the chill seeps in through the storm windows, I start looking for a book that matches the mood of a year that’s dying beautifully. So it was I came upon An Inheritance of Ashes by Leah Bobet. While I like Amazon just fine, the magic of the brick-and-mortar bookstore is finding that book face out that you’d otherwise never have seen. I read a lot of fiction—more than I post about on this blog—and a great deal of it come from the unexpected find in the local indy.

The story’s difficult to classify. Set in a future that sounds quite a lot like post-Civil War days, two sisters, Marthe and Hallie, try to keep a living at Roadstead Farm. The last of the soldiers have made their way back from the war where the Wicked God was killed. We never see the Wicked God clearly. He’s from a parallel world and is championed by his prophet. The death of the Wicked God was largely thought to be the end of the war. The passage between worlds, however, isn’t as secure as they armies thought. Religion doesn’t play a strong role here, but it was the cause of the war that has devastated the nation.

Fictional worlds require believers. Stories need not be religious to include religion. Without it, many tales lack verisimilitude. People are religious creatures by nature. Belief drives us, whether secular or sacred. This novel about a family trying to pull together in the aftermath of an evil god’s death. There’s a purgatory here from which those who believe can be rescued. And Hallie, who believes, ends up saving her own entire world. Religious? Not really, but it is all about belief. We need books that encourage faith in dark times. Indeed, An Inheritance of Ashes is about a dark period of uncertainty. What used to be true is open to question in these days when one belief system is determined to wipe out all others for good. Not so much live and let live as it is give and not give back. Ashes, whether literal as in Bobet’s world, or figurative as in our own, are appropriate reflections as the year begins to die.